LU To Play In Vegas Classic 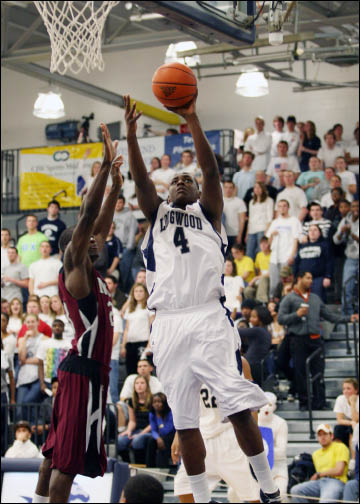 Longwood will play four games in the exempt tournament, including road games at the University of New Mexico December 17 and the University of Colorado Dec. 19 before two neutral-site contests at the Orleans Arena in Las Vegas, Nevada Dec. 22-23. The Lancers will play Southern Illinois University Edwardsville Dec. 22, and either The Citadel or South Carolina State University Dec. 23 in Las Vegas.

It will be Longwood's third appearance in the Las Vegas Classic (2004, 2006), and its fourth overall tournament appearance in Nevada, including the 2008 Las Vegas Invitational. Indiana University and the University of Northern Iowa are also in the Classic's eight-team field.

“The Las Vegas Classic continues to afford us opportunities we need to move the Longwood Basketball Program in the right direction,” said Gillian. “One of our main goals in scheduling is to play high profile opponents for a number of different reasons. We want to challenge ourselves against some of the very best competition in the country, play in some of college basketball's most historic venues, and take Longwood Basketball around the United States as a positive representative of this great University.

“Just last month, I had a group of people approach me in Chicago's Midway airport to say how much of a pleasure it was to watch us play and the way our players' handled themselves in a game we played at Illinois as part of the 2004 Las Vegas Classic. They had been following our progress ever since and telling their friends about Longwood. Six years ago we played that game in a sold out arena, against a team full of future NBA players which would eventually fall one game short of a national championship, and none of those same fans had ever even heard of Longwood at that time.”

Longwood will tip-off at New Mexico of the Mountain West Conference (MWC) at 9 p.m. eastern time on Friday night, Dec. 17, at The Pit in Albuquerque.

The Lobos are coached by fourth-year head coach Steve Alford and finished last season 30-5, including 14-2 in the MWC, while advancing to the second round of the NCAA Tournament.

The Lancers tip at Colorado of the Big 12 Conference at 3 p.m. ET on Sunday afternoon, Dec. 19, in Boulder. The Buffaloes are coached by first-year head coach Tad Boyle and finished 15-16, including 6-10 in the Big 12.

The SIU-Edwardsville game will start at 2:30 p.m. ET on Wednesday afternoon, Dec. 22, in Las Vegas at the Orleans Arena where Longwood is 3-1 in its four previous contests at the facility.

The Independent Cougars are coached by fourth-year head coach Lennox Forrester and finished 5-23. The final game in Vegas against either The Citadel of the Southern Conference (SoCon) or South Carolina State of the Mid-Eastern Athletic Conference (MEAC) will begin at either 2:30 or 5 p.m. ET, depending on the outcomes the day before.

The program also returns junior Durann Neil who averaged 7.1 points and 3.9 assists as a starter in 2008-09. Neil (6-1, 185) missed last year due to injury but is fully recovered for the upcoming season.

I Can No Longer Love Me Some Me