Look, Up In The Sky: 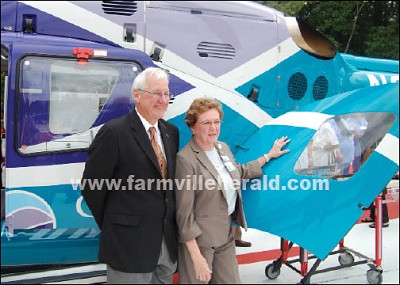 FARMVILLE – A speck appears on the face of the sky beyond the hospital, faintly at first-like a pulse supported only by prayers.

A dot above the treetops.

An apostrophe or comma coming from the clouds, as the prayers continue.

The sound comes next.

Relentless, determined, and growing louder with each passing moment.

Quicker than imagined, the air ambulance circles Centra Southside Community Hospital and Centra One lands with the mighty rush of a thousand breezes blown at once.

One small landing for the pilot, perhaps, as part of Friday's dedication ceremony.

But one giant leap for those whose lives will be saved in Centra Health's service area because of the new dual-engine EC-135 helicopter, the flight crew, hospital-based medical staff, and emergency responders who will team up to make fewer seconds matter more.

“This is a remarkable day,” said Centra President and CEO, George Dawson, who told those gathered that “this helicopter's job is to get people to where they need to be in a hurry, whether that's picked up from an accident and brought to this facility or transported from Southside to Centra Lynchburg or wherever the patient might need to go…”

E. W. Tibbs, Centra's Senior Vice-President of Operations, told the approximately 100 people gathered at the hospital's helipad, “It's faster service. Time matters. With this helicopter we're able to get to people in a much more timely fashion…Time is essential.”

“With the helicopter and our team,” Tibbs said, “we're able to cover well east of Farmville to well west of Bedford County, north of Charlottesville and certainly down to the North Carolina border. So our service area is expanded by, I would say, at least two-fold.

“We're able to really get out there,” he said, and “touch more people's lives…”

As Flight Nurse on Centra One, the touch of June Leffke will be among those that are most crucial.

“It's not just the speed of the aircraft, it's also the communication between the hospitals and the people at the scene if it's a crash victim,” she told The Herald after Friday's dedication and blessing of the helicopter. “They can call us before they ever get to the scene, if it sounds like a serious event, so that we can be preparing-It takes us approximately 10 minutes to get off the ground, roughly, eight to 10 minutes. So we can have that eight to 10 minutes out of the way by the time they realize whether they need us or not. Or we can even be in the air. And then if they say 'We don't need you' we can go back.

“That shortens the person's golden hour,” Flight Nurse Leffke said regarding that window of 60 minutes where life-saving care can save a life. “You shave a minute or five minutes here or six minutes there-I mean, the eight minutes that we take to prepare for (the pilot) to start his engines and get everything going, if we don't have to worry about that we can be in route…That really is beneficial to the patient.”

She described a recent event where the doctor called for the helicopter “before the patient ever got here. (In the past), we would not have been able to come until we knew where the patient was going. By the time the patient got here the helicopter was halfway here. It made a true difference in this patient's outcome and it's going to continue to help patients get where they need to be and get there in a quicker, safer fashion.”

Greater speed, greater safety, and trained medical professionals to turn that time into a lifetime saved.

Centra Health has contracted with PHI for the air ambulance service. The company, said Tibbs, is “noted across the country as one of the top medical helicopter programs, on a number of levels. For aviation but, most importantly to us, their safety record…If we're not safe, the rest doesn't matter.”

In addition to the dual engines-a redundancy that allows the chopper to fly even if one engine goes out-the helicopter has auto-pilot technology, night vision goggles and terrain awareness or collision-avoidance features, too.

The aircraft is also larger, allowing Leffke to more easily provide medical care, the additional space offering crucial increased access to the patient. As for what medical care Flight Nurse Leffke can provide, she said, “We can do just about anything in the helicopter that we have authority to do; we can do it in the helicopter as well as on the ground.” And they have authority to do many, many things. Nor are they alone.

Dawson emphasized the “the excellent teamwork” that goes into each life-saving mission-in the air and on the ground.

“Without excellent hospitals,” he said, “transportation systems like this don't make a difference.”

Dr. McLeod spoke of the days of classroom training by the hospital's emergency department and staff, as well as EMS agencies in the region, “learning how to be the best of the best. And that's what we have here.”

Dr. Stephen Keith, chair of the hospital's board of directors, and joined by Centra Southside Community Hospital CEO and President, Dr. Gwen Eddleman, said, “This is a big time for us at Centra Southside.”

For Dawson, the main message is “if you work for Centra or if you work with Centra, or you're a physician on the staff, or if you're a citizen of Prince Edward County or Farmville, Virginia or any of the surrounding counties, you're a part of the team.

“What we want to recognize,” Centra's CEO said, “is what we can do when we work together. And I want to tell you that on my behalf, and on behalf of everybody at Centra, we're deeply committed to our mission here at Centra Southside. We're glad that we're working together as teammates.”

Answered prayers with many, many voices.

And a pulse supported by many hearts.