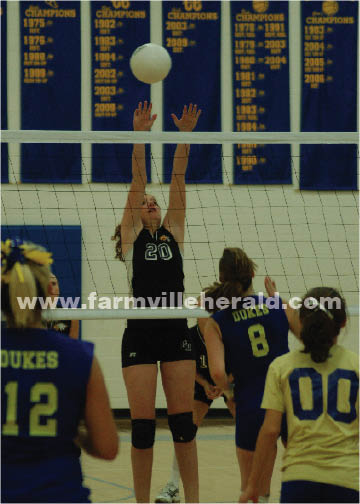 CUMBERLAND – Wednesday night's season-opening volleyball match between Prince Edward and Cumberland was a first step for both programs in the non-district bout of cross-river rivals.

Cumberland took its first steps in rebuilding its program, while Prince Edward, an established program, played its first match under new leadership.

“The first two games, we played like we wanted to play for the opening match,” said first-year varsity head coach Bruce Bogese. “In the second game, we established that we were going to play our reserves more, and in all actuality, we played very well. It proved that we don't have much of a drop-off when we go to our bench.”

The third game is the one Cumberland will choose to remember. With their backs against the wall, Cumberland didn't back down against what was mostly PE's first string. The Dukes held a late lead, up 21-20, before PE rallied by scoring five of the sets final six points to take the match in straight sets.

“We made some changes before that third set that proved to be beneficial for us,” said CHS first-year head coach Heather Storrie. “We were unable to push it to the fourth game, but I feel the girls now know that we can play with them.

“A lot of what we're battling right now is confidence. We know they can do it, and they do to, they just need to see it tangibly.”

Prince Edward jumped out to early leads in both the first two sets, taking an 8-0 lead in the first and an 11-1 in the second, before Cumberland got any traction. Cumberland closed to within 11-8 in the first, and trailed 20-13 on a block by Mackenzie Parker, before PE rattled off four consecutive points to pretty much put the first set away.

Prince Edward had no comeback worries in the second set, and closed a relatively easy second set with two aces by Rachel Thomson.

Cumberland jumped out to an 11-8 lead in the third set, as Prince Edward committed a few more unforced errors. Still, Cumberland was able to score points through its offense, which was a change from the first two sets.

Prince Edward tied the third set at 18 apiece on two consecutive kills by senior outside hitter Allison Dalton. Cumberland jumped back in front on a double-hit by PE to reclaim the advantage at 21-20, before Thomson registered a kill in the Cumberland backcourt to give the Lady Eagles the momentum for good.

“I have to credit coach [Mehgan] Jones for a lot of this victory,” said Bogese. “She gave me a different perspective, especially in that third set. We were able to remain calm, and salvage the third without having to go to a fourth set.

“Everyone played to my expectation tonight, and I'm pleased. Cumberland has gotten a lot better, and they really pushed us in that third set. They played well.”

For Cumberland it was an improvement against an established program. That fact did not get lost on Storrie.

“It's hard to play the first game of the season at home, and having Prince Edward didn't make things any easier. But we didn't just roll over and let them have that third set. I like what I saw. They fought back and pushed to the end. You have to win three sets to win the match, and it doesn't matter which three you win. Right now, our biggest block is confidence. You can teach Xs and Os, but they have to believe they can win. Sometimes that's the hardest part. I believe they can do it, and I think they are starting to believe they can as well.”

Prince Edward will travel to Randolph-Henry on Monday, August 30, while Cumberland hosts Fuqua on the same night. The two will play a re-match on September 1 in Farmville.