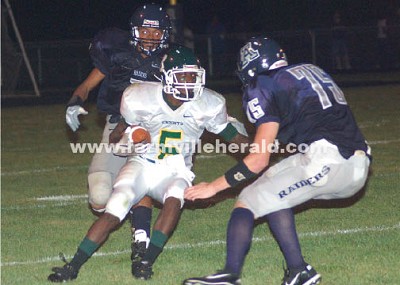 APPOMATTOX – It wasn't the prettiest victory in the history of Buckingham County High School football, but don't expect the Knights to throw back their 13-7 win over the Raiders.

The two teams accounted for a combined total of eight fumbles, Appomattox dominated total time of possession and most of the 25 players on the BCHS roster suffered from cramping at least once on a rather cool but muggy evening at Bragg Stadium.

“Whenever we needed a big play, someone stepped up and came through for us,” said BCHS head coach Craig Gill. “We beat a good team tonight. I think the biggest thing that showed for us is that we've got to get in shape. We're low on depth, and a lot of our boys are playing both ways, but we've got to be better conditioned.”

Defending its seven-point lead late in the game, Buckingham junior Tarian Ayers jumped up to bring in an interception with 2:14 on the BCHS 30-yard line to seal the game.

Ayers, who also plays quarterback, injured his ankle earlier in the night, relegating him to his offensive duties until the final drive.

“You see your teammates out there suffering from cramps, but still making plays, it makes you want to get back out there,” said Ayers. “When I saw the ball coming my way, was thinking if I should jump for it. I wanted to cry, but I went up for it and made the interception.

It was the second drive-stopping interception by Buckingham in the fourth quarter. Earlier, freshman Kenneth Johnson halted an Appomattox drive with an interception on the BCHS 23-yard line.

“Appomattox beat us on a sweep pass a couple of years ago in a game similar to this,” said Gill. “We knew they could make a big play at any time.”

“We made little mistakes all game,” said Appomattox coach Ben Martin. “We'll clean those things up with experience. Both teams lost a lot from last year, but we lost to a good team. Buckingham is a playoff-caliber team.”

Buckingham started quickly on offense. The Knights took the opening kickoff to the Appomattox four-yard-line, primarily operating out of the spread, before turning the ball over on downs.

Appomattox took over, but fumbled deep in its territory to set up a 30-yard touchdown run by BCHS senior tailback Maurice Taylor with 5:49 remaining in the first quarter.

Both teams were plagued by fumbles all night, and both teams capitalized on turnovers. Late in the first quarter, Appomattox recovered a Buckingham fumble on the Knights' five-yard line and two plays later closed to within a point on a two-yard touchdown by Clarence Copeland.

The two teams battled to a stalemate for the remainder of the half, and Appomattox controlled the ball for most of the third quarter, with the exception of a quick scoring drive by Buckingham midway through the period.

With 7:25 remaining in the third Buckingham took possession on its own 32-yard-line. The Knights went back to the spread, and moved the ball effectively. After being aided by a roughing the passer penalty, Ayers found a wide-open Camre Johnson just in front of the endzone for a 21-yard touchdown with 4:36 remaining in the third, giving the Knights a 13-6 advantage.

Appomattox took over possession on its 20-yard line, and effectively moved the ball down the field in small chunks before Kenneth Johnson hauled in the first game-changing interception.

“We didn't hydrate properly,” admitted Ayers. “Before the game we went to Wendy's and everyone loaded up on sodas. With a lot of players going both ways, we can't afford to do that. We've got to hydrate with Gatorade and water all through the week, and we've got to make sure we're in better shape.”

Buckingham was led in rushing by Taylor, who rushed 17 times for 118 yards, including a victory-clinching 38-yard run in the waning moments of the contest. Ayers rushed five times for 17 yards, with a lot of his yards being negated by offensive miscues.

“We stopped ourselves on numerous occasions,” said Gill. “I really think Appomattox has a good football team, but going forward we've got to be more consistent and limit our mistakes.”

Buckingham will host Nelson on Friday night at 7 p.m. in what is the Knights' home-opener, and Nelson's first game of the season.