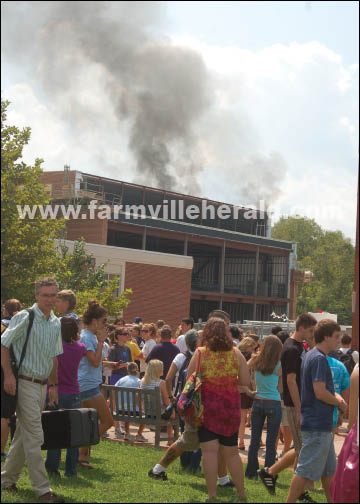 Longwood University Associate Vice President for Marketing and Communications Dennis Sercombe at the scene as firefighters worked to put out the fire, reported – citing information that he had received – that shortly after 2 p.m. a small construction fire broke out in the upper level of the addition.

Sercomombe later issued a statement Monday saying, “initial reports indicate that the fire started from a welding operation that generated sparks which ignited some loose insulation.”

Firefighters from Farmville, Hampden-Sydney, Prospect, and Darlington Heights and the Prince Edward Rescue Squad responded to the scene.

“My understanding, there has been one person, a worker, is being treated for smoke inhalation,” Sercombe said.

He noted that for safety precaution the neighboring buildings have been evacuated-which include Wygal, Greenwood Library, and the Center for Communications Studies and Theater.

Sercombe reported Tuesday that at 5 p.m., all the buildings were reopened and the fire marshal released the buildings back to Longwood. A fire watch was posted overnight.