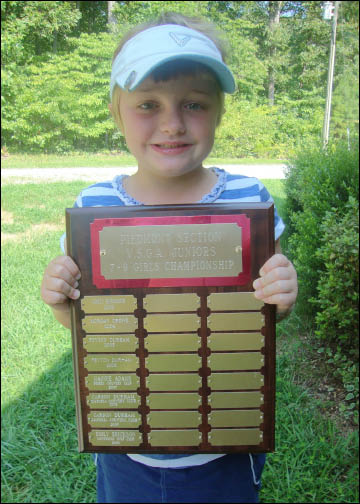 Emily Erickson recently won the Girls 7-9 Jr. Piedmont Virginia State Golf Association Championship. The tour consisted of six tournaments at various locations around Southside Virginia. Emily placed second in the first tournament and won the remaining five, including the Championship match in Halifax. She received a plaque for her accomplishment that will be on display for one year in the Longwood University Golf Course Clubhouse. Erickson also placed second in the Girls 7-9 VSGA Championship held in Midlothian, August 4-5. The tournament consisted of two 18-hole matches at the Independence Golf Course. She won the longest drive competition with a 186-yard drive. She also won the Farmville Municipal Junior Golf Tournament in the 7-9 division. Emily, who resides in Green Bay, is a third grade student at Fuqua School. She has been golfing for only a year, and is coached by Longwood University women's golf coach Ali Wright. (Submitted Photo)