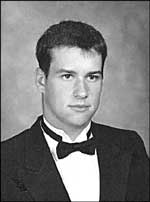 He was a member of Fort Gibson United Methodist Church, Castlewood, where he worked with the youth of the church during his teen years. A 1997 graduate of Castlewood High School as Valedictorian, he lettered in track, forensics, golf, and football; participated in various clubs, basketball, and community activities. He received the I DARE You award in recognition of personal integrity, balanced living and leadership.

In addition to his father he was preceded in death by his grandfathers, Kenneth Baker Bolling, and Bobby Gene Owens, both of Lebanon, and Buddy Poole, Castlewood.

Donation may be sent to Fort Gibson United Methodist Church Memorial Fund, P.O. Box 86, Castlewood, VA 24224 or a charity of your preference.

The memorial service will be conducted at 7 p.m. Thursday, October 16, in the Green Valley Baptist Church with the Rev. Kenny Bolling and the Rev. Tom Edwards officiating.

The family will receive friends from 4 to 6:45 p.m prior to service at the church.