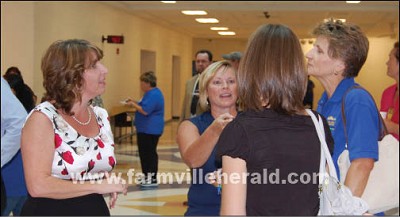 “I am honored and humbled to be selected to lead the division,” expressed Dr. Griffin after the announcement was made, “to lead our division and each other to teach our students to think critically and to problem solve and to collaborate so that they can be competitive in a global society…”

According to School Board Chair Dr. Christine Ross, the Board wanted to make the announcement to the school's faculty and staff before holding its called meeting later in the afternoon.

“We really felt this was important to come to employees before it went…anyplace else,” she said. “That's why we called the meeting first.”

Dr. Griffin has served as “acting superintendent” since July 1.

The School Board took on the superintendent search this summer.

“It was determined at that time that we wanted to do a full superintendent search because we wanted to make sure that we hired the absolute, best person that we could possibly find,” Dr. Ross said about the interview process.

Stay tuned to The Farmville Herald for more on the Cumberland new superintendent.