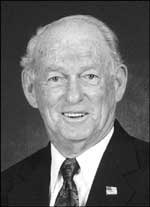 Mr. Ellett is survived by one sister, Mrs. Annie B. Amos and a brother, Horace “Doo” Ellett, both of Burkeville. He was preceded in death by his parents, Charlie W. and Ethel, sisters, Esther Robertson and Estelle Shriver, and brothers, Clarence and Willie P. Ellett.

Charlie was a graduate of Burkeville High School. He was a dairy farmer selling as a Grade A producer to Virginia Dairy Company and other markets for thirty years. Most recently, he raised beef cattle and a tremendous garden that he was more than willing to share with everyone. Serving as Vice-President of the Nottoway County Farm Bureau for many years, Mr. Ellett continued to rally for area farmers to help improve their conditions. He represented Nottoway County Farm Bureau as a delegate to their convention for several years. He also served on the Southern States Cooperative Board for several years.

As a member of Wards Chapel United Methodist Church, he served on the Official Board, Financial Committee, Board of Trustees, Financial Secretary, and various other committees. He was well known for “Charlie's Vegetable Wagon” at the church's annual Harvest Festival.

Funeral services were held at Wards Chapel United Methodist Church in Crewe on Thursday, October 2, at 11 a.m. with interment in the church cemetery.

Memorials may be made to Wards Chapel United Methodist Church, Crewe, or Burkeville Volunteer Fire Department, or the Nottoway County Emergency Squad.