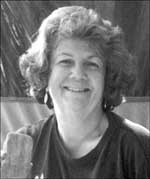 OCTOBER 7 – Our beloved Carolyn Ann Varner Baldwin was called home to God in the early morning hours of Sunday, October 5, 2008. For 59 years she has been a gift to all of God's creations – people, animals, plants, rocks, and the soil. Carolyn avidly loved life with an infectious zest; was as vibrant and colorful as the plants she grew; and as strong and unique as each rock she has handled. All that knew her have been blessed by her radiant compassion, unwavering honesty and persistent faithfulness. Carolyn's legacy will live on through all that she has touched.

She is survived by her loving husband, Thomas Henry Baldwin, of 39 years; her dedicated son, Clint Irvin Baldwin and wife, Beverly Easter Baldwin of Farmville; a beautiful daughter, Joanna Carrie Baldwin of Farmville and her boyfriend, Jonathan T. Quinn, who became like an adopted son to her; a sweet grandson, Owen Nicholas Baldwin, light of her life; her two loving parents, Lawrence Cary Varner and Anne Newcomb Varner of Farmville; two sisters, Dell Carrie Varner of Farmville and Aurelia Catherine Dunn of Maryland; two brothers, Dr. Lawrence Callie Varner and Edward Longest Varner, both of Farmville; and many cousins, nieces, nephews, aunts and uncles. She is deeply loved and will be missed by many. She was preceded in death by her brother, Harold Joseph Varner.

A funeral service will be held Wednesday, October 8 at 3 p.m. at Antioch United Methodist Church with interment in the church cemetery.

Memorials may be made to the Randolph Community Center or to Madeline's House.