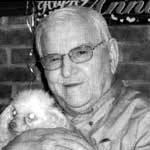 RICHMOND, July 13 – Chester Lane, 88, of Richmond, formerly of Farmville, went home to be with the Lord on Saturday, July 10, 2010. He was a WWII veteran who received the Purple Heart for his service in the Philippines, and who died in Maguire Veterans Nursing Home.

He leaves behind his wife of 66 years, Polly; son and daughter-in-law, Robert and Shirley; two grandchildren and their spouses, Dana and Bill Plowden, and Robert and Jana Lane; six great-grandchildren, Kaleigh and Leah Plowden, and Bran-don, Bobby, Brookelynn, and Hayden Lane; two brothers, Bill (Leila) and Earl Lane; sister, Ola (Amos) Loveday; and his beloved poodle, Mitzi. He was preceded in death by son, Dennis, sister, Verna, and sister-in-law, Catherine.

He was a member of Worsham Baptist Church and of Veterans of Foreign War. He loved to play bingo, and was an inspiration to all of the veterans and nurses at Maguire Veterans Nursing Home.

Online condolences may be made at