With the Thanksgiving holiday over and Christmas quickly approaching, it is time to look ahead to the 2023 General Assembly Session. The constitution of Virginia ... Read more

Your turn — The election is over. Now what?

The 2022 election is over and as the dust is settling, Republicans have taken a majority in the U.S. House of Representatives. This majority allows ... Read more

Late last week an advisory committee for the Centers for Disease Control (CDC) and Prevention voted unanimously to add the COVID vaccine to the Federal ... Read more 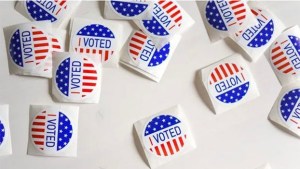 Last November, Virginians elected a GOP majority in the House and the first Republican governor in over a decade. Last year’s historic election proved that ... Read more

Your Turn — Surplus should be used for tax rebates

Agriculture and forestry are the first and third largest sectors in Virginia industry, respectively. With this in mind, Governor Youngkin’s budget will address critical issues ... Read more

Opinion — Surplus indicates taxes in state are too high

Virginia is seeing its second consecutive multibillion-dollar revenue surplus. The fiscal year ended on June 30 with a surplus of about $1.94 billion, bolstered by ... Read more

Continuing from last week’s newsletter, I wanted to update constituents on more legislation that passed the 2022 session and is law in the Commonwealth as ... Read more

Virginia drivers will be paying more at the pump, as the gas tax rose on Friday to keep pace with inflation. A project of House ... Read more

Opinion — Budget to get final OK after amendments considered

On Thursday, June 9, both HB 29 and HB 30 were duly enrolled, signed by the presiding officers of each house and communicated to the ... Read more

The Virginia House and Senate passed two budget bills and sent the budget to the governor last Wednesday, setting the stage for final consideration of ... Read more

In the 2022 General Assembly session, we worked diligently to ensure that our health care workers in Virginia had more opportunities to practice their skills ... Read more

The mental health crisis being faced by our Veterans has been a crucial issue that needed to be addressed in our Commonwealth. That’s why we ... Read more

The Virginia General Assembly has completed its 2022 legislative session and while we are still waiting on the budget to be finalized, I would also ... Read more

On Wednesday, April 27, we will return to Richmond to review and vote on Governor amendments. We are currently still in special session, and we ... Read more

Opinion — What’s up next

The Reconvened Session on April 27 is likely to be a lengthy session given the amount of actions taken by Governor Youngkin. The Governor announced ... Read more

Governor Glenn Youngkin has already signed over 700 bills into law from the 2022 General Assembly Session. This week I am highlighting several of those ... Read more

When we adjourned Sine Die on March 12, there was a great deal of work left to be done. House Republicans were ready to stay ... Read more

The 2022 Regular Session of the Virginia General Assembly adjourned sine die on March 12th. House Republicans came into this session focused on addressing the ... Read more

Last week marked the fourth week of the 2022 General Assembly session. We’ve made huge strides when it comes to restoring election integrity for Virginians. ... Read more

Opinion — We work for you

We’ve been hard at work for nearly three weeks now in the Virginia General Assembly, and we’ve already made huge strides for Virginia’s families. With ... Read more

Governor Glenn Youngkin took decisive action Thursday in the fight against COVID-19. He is applying an equal mix of science and common sense to fighting ... Read more

Your turn — Changes for the new year

The first week of session is completed. During that time, a new speaker was elected, and all appointments were made. This year, I was selected ... Read more