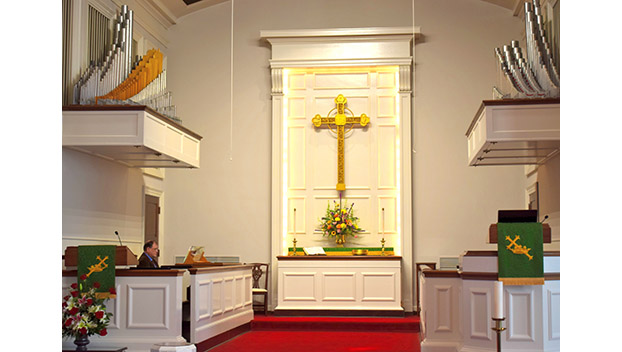 Mell and I love to visit “Epworth by the Sea” a retreat center in St. Simons, Georgia; named for the England home of John and Charles Wesley, founders of the United Methodist Church. While exploring St. Simons, we discovered several roadside plaques recognizing the contributions of the Wesley brothers. Curious to know more, I visited a bookstore to see what local historians had to say about their only visit to America.

In 1736, John and Charles, arrived from England to St. Simons Island, Georgia to oversee the local church and fulfill their dream of witnessing their faith with Native Americans. According to local historians the trip was a failure. “Although a number of illustrations show the Wesleys preaching to the Indians, they never did.

Fresh out of the disciplined life of school, they were not prepared for the harsh living conditions deep in the country. Often, John wore his formal attire even when working in the woods. His insistence on holding worship services as if he were in London seemed odd. It would be like wearing my suit and tie to go fishing. As you can imagine, everyone mostly laughed at him.

A trip to St. Simons

Moreover, John fell in love but couldn’t seem to make up his mind whether to marry. He should have, but he didn’t. He could have, but he wouldn’t. Tired of waiting, his sweetheart gave up on him and married someone else. Furious, John refused to serve communion to the newly married couple. This unfortunate incident turned out to be the last straw. John was run out of town and found himself back on a ship headed toward England. Charles had already left.

So, by all accounts the Wesley brothers’ trip to Georgia was a failure. So why would St. Simons, honor them? Why name “Epworth by the Sea” after their boyhood home? One important part of the John Wesley story takes place during a storm that occurred while John was on that ship.

“Without storms we seldom look for the light. Without storms we cannot grow.” John and Charles Wesley faced many storms. John thought his mission was to preach to the native Americans in Georgia but that was a failure so John was on a ship heading home and… there was a ferocious storm. The ship tossed erratically amidst the monstrous waves. John, already depressed because of his failed mission, was heartbroken, seasick, and scared out of his wits.

A turning point for John Wesley

Yet, it was at this point that John Wesley’s life was about to turn.

While on deck, holding desperately to anything solid, John noticed several families near the stern serenely singing hymns. He couldn’t believe it! How could they conduct worship and sing in the midst of such a terrible storm? Why weren’t they more frightened? John marveled at their faith and vowed to learn more.

Weeks after arriving home, John continued contemplating his own mess of a life in contrast to the people contentedly singing in the midst of the storm. One night he heard someone reading a commentary on the book of Romans and began to understand what he was missing: “Since we have been made right in God’s sight by faith, we have peace with God.” As John heard these words describing God’s grace, John would later write: “I felt my heart strangely warmed.”

Faith is not earned

What warmed John’s heart was the realization that faith was not earned by hard work or intellectual research. Both are helpful, but real faith comes from the heart and from committing to an ongoing relationship with God through Jesus Christ. We think religious satisfaction only comes from doing. John learned that real faith comes not from doing something but from being something. Wow!

A changed John Wesley along with his brother Charles soon began preaching again, but this time his passion was evident as he spoke of faith through God’s astounding grace. Local preachers, feeling uncomfortable with John’s enthusiasm, refused to invite him back. But it no longer mattered, for John was preaching throughout the countryside. John began preaching so often that groups or societies began to form around the country. Other churches and leaders tried to stop the movement but, the more they tried to stop him, the stronger and more popular he became.

John formed small groups or societies based on personal accountability, discipleship and teaching. These societies would become the foundation for Methodist churches all over the world. Charles Wesley provided music and wrote lyrics for more than 6,000 hymns, including, “Hark, the Herald Angels Sing” sung at Christmas and “Christ the Lord Is Risen Today” sung at Easter.

Near the end of his life, no one in all of England — including the king — was more recognizable than John Wesley. He rode between sixty and seventy miles a day by horseback. He would get up at four in the morning, preach at five and by six he was in the saddle and on the road. He did this until well into his eighties.

Three things I think describe what John Wesley advocated most?

John Wesley delivered more than 42,000 sermons in fifty years, which is an average of over fifteen sermons a week. More than a preacher, however, John Wesley was also an organizer. His societies eventually became the United Methodist Church, which is one of the largest Christian movements in the world today and the church I proudly serve as pastor.

Visiting “Epworth by the Sea” for me is more than a vacation. It’s a pleasant reminder that I belong to a church that works to make a difference for God and throughout the world. I pray that I continue to live up to the foundation laid by John and Charles Wesley.