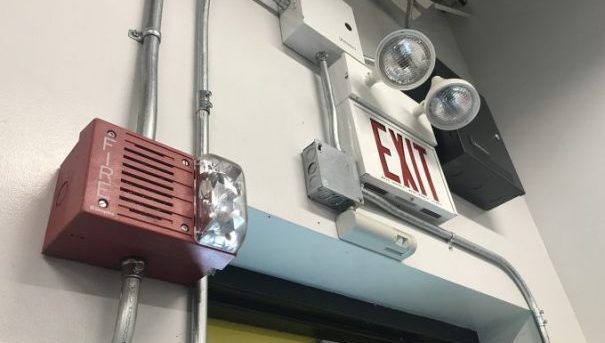 FARMVILLE – What started as a problem for Prince Edward County schools became a unique opportunity for a class of high school students over the last few months.

Every six months to a year, the fire marshal comes to evaluate the schools. The evaluation is to make sure everything is up to code and the fire escape plans are updated and ready in case of a fire. During the visit, the fire marshal found that the school’s fire evacuation plans needed updating. He also advised them to add a secondary escape route. Instead of hiring an outside source, the schools had a different idea.

The Drafting 2 class at Prince Edward County High is made up of 11th and 12th graders who are learning how to use computer-aided drafting (CAD) programs, which help create drawings and blueprints for products and buildings. So far in the class, they have created two-dimensional flat patterns that fold into three-dimensional objects, worked with a 3-D printer solid modeling as well as created different containers with cardstock. Now, the students are putting their knowledge of the CAD program to the test as they create the updated fire evacuation plans.

“This creates work-based learning and real-life job experiences,” said Chris Wahrman, assistant principal at Prince Edward County High. “The students are doing it like they are hired by a firm and starting from ground zero.”

The class will eventually do these fire evacuation plans for all the schools in the district, but before Christmas break, they started with the high school. They spent a class period walking around the school sketching the layout and taking measurements to create a scale blueprint. They then took their recordings and combined them with notes from maintenance to create their CAD drawings.

According to the drafting teacher, Terrance Beddow, each student is working on plans for a different building in the high school. They will take their blueprints and create primary and secondary fire escape routes out of each room. These plans will be printed out and placed in the rooms to use for regular fire drills and if a real fire takes place. The PDFs of all their work will be saved by the school district for future updates as well.

“This is a chance for the students to earn real-life experience,” said Beddow. “This project incorporates college and career readiness while also creating something that will aid others. Not all schools have this program.”

The high school will be finished soon and then the class will move on to other schools. Beddow hopes to arrange an opportunity for the students to go to the other schools to do the measurements again and work from the ground up as they did with the high school.