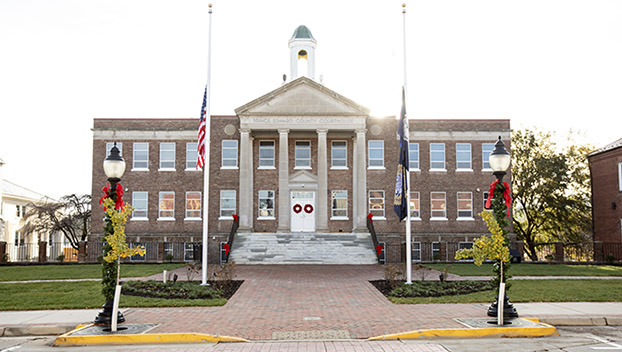 FARMVILLE – For years, the front lawn of the Prince Edward County Courthouse has not been prioritized as a place for residents to gather or admire. However, that’s about to change. The lawn project is finished, the facility is now renovated and ready for residents and events.

The lawn of the courthouse is a large part of Main Street that was not utilized as it should be. According to Doug Stanley, ever since he started as the county administrator in November 2020 the project to renovate the courthouse lawn has been one of the top priorities.

“It needed some dressing up and improvements to the site’s aesthetic,” said Stanley. “There used to be poles with chains upfront and it didn’t look inviting. It looked like it was to keep people out and that’s not what we want.”

What did the project include?

In the May 2022 Board of Supervisors meeting, the board approved the bid of $335,500 from Piney Ridge Contracting and Consulting Inc. to do the project. The project was funded by the County’s general fund as part of the 2022-2024 Capital Improvement Plan. In the Comprehensive Plan, it is listed as a “goal to enhance community appearance and property maintenance.” The work started at the end of June and ended in mid-November.

The improvements included reconstruction of the plaza and installation of new plaza and walkways as some bricks were causing a tripping hazard and the gravel walkways kept washing away in the rain. Old shrubs were removed and replaced with new landscaping and the brick columns were removed as well due to deterioration. The flagpoles were replaced and new signage, lighting and site furniture were added including benches and outdoor seating for residents and staff to eat. New railings were added and the remaining ones were sanded and repainted.

The goal is for the lawn to be somewhere the over 23,000 residents of Prince Edward County could gather for events and serve as a place of inspiration and reflection for the community. The new lawn has already been a part of a few events including Trunk or Treat and was home to the judges for the Christmas parade.

“I appreciate the Board of Supervisors prioritizing this project and the staff for their recommendations,” said Stanley. “Also, Building and Grounds Supervisor Randy Cook for his supervision and Land Planning and Design Associates from Charlottesville for doing the design.”