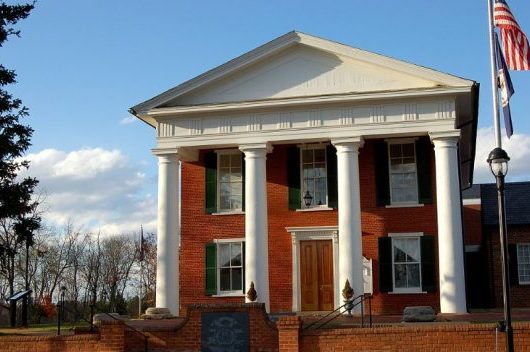 The Buckingham County Courthouse is rich with history. Thomas Jefferson designed the plans for its original build in 1822. Then the structure was rebuilt in 1873. Due to years of wear and tear, the building has many needs. Luckily the Commonwealth Regional Council (CRC) is on the case.

The CRC applied for a grant through Save America’s Treasures, a National Park Service project that works to protect historical buildings, arts and other works. Due to being designed by Thomas Jefferson and being located in the National Historic District in Buckingham, the courthouse is eligible.

“It’s an older building that was designed by Thomas Jefferson, so it has lots of needs,” said CRC Executive Director Melody Foster.

According to Foster, the recipients of the grant will be announced sometime this summer. The announcement usually takes place six months after the application date, which was Dec. 20.

This grant is a matching grant and will cover 50% of the costs of the renovations with the other half coming from Buckingham County. The total cost for the renovation is $1,371,133 meaning that the grant will be for $685,566.50.

“Hopefully we can get the grant and less tax money will have to be used,” said Foster.

The renovation is planned to include repairing the wooden windows, excavating the east alley, creating a foundation drain to keep moisture away, replacing and restoring the slate roof, repairing the expansion joint, moisture repair treatment, painting the interior, replacing a wall with masonry and repairing the historic brick.

According to the CRC, the original courthouse was built in 1818 in the village of Maysville and within three years a new courthouse was needed. One of the Buckingham County commissioners, Charles Yancy, wrote Thomas Jefferson requesting a set of plans, and in 1822 the state’s first temple-form, porticoed courthouse was completed.

The Courthouse is located at 13061 W. James Anderson Highway in the middle of the Buckingham County Courthouse Historic District, which was listed on the National Register of Historic Places in 1969.