Mother Nature’s Garden: A much needed hike and old friends 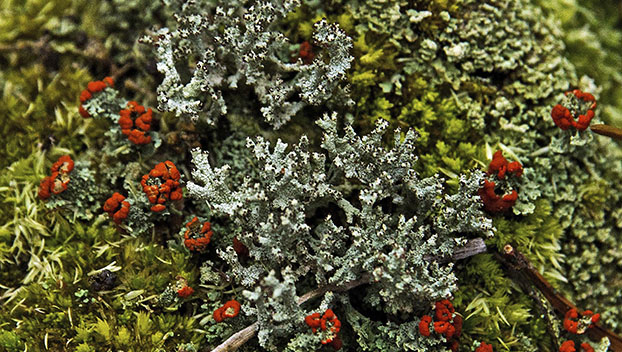 It’s Boxing Day, and life has mostly returned to normal here at Mother Nature’s Garden. The dogs are slumped on their beds, refusing to make eye contact with anyone. For once, I suspect they’ve had more than enough attention. We felt the same: The need for solitude and rejuvenation in nature.

Even though the high temperature today was barely above freezing, we decided to take the dogs on an amble along the Lakeshore Trail at Holliday Lake State Park. As expected, it was quiet and peaceful. The dogs had a sniff fest. I don’t know what they found that was so interesting, but they kept their noses to the ground for about half a mile.

As for us humans, we were intrigued by the mosses and lichen festooning rocks and logs. There’s a whole other world of small creatures down at ground level. The British soldier lichen was certainly the showiest one that we found. It was one of the first that I learned to recognize as a child, and I’m always happy when I find it again. The common name, British soldier, comes from the supposed resemblance of the red cap on the fruiting body to the traditional red uniform worn by British soldier during the American Revolution. Less frequently and certainly less poetically, this lichen is known as fairy barf.

British soldiers aren’t plants. As lichens, they’re an association of two or sometimes three organisms. In this case, a green alga, Trebouxia erica, and a fungus, Cladonia cristatella). The resulting lichen carries the scientific name of its fungal partner. The alga conducts photosynthesis, and the fungus receives sugars from it. The fungus provides structure, some protection from too much sunlight, minerals, and water. For years, it’s been said that the relationship between the partners in British soldiers is mutualistic, but recent studies involving radioactive compounds seem to suggest that there is a controlled parasitism of the alga by the fungus.

British soldiers grow ever so slowly, only about a millimeter or so per year, so even a small patch can be decades old. They’re an important part of the ecosystem. They decompose wood and return nutrients to the soil. They’re very sensitive to air pollution and serve as an early warning system about rising levels of pollution. Are they edible? Well, yes, but you really wouldn’t want to eat them. They’re very acidic and would harm your digestive system if not properly prepared.

The woods may seem dead, but they’re just waiting for the first warm days of early spring. If you look carefully, there’re plenty of signs of life. If you get a chance, walk at least part of the Lake Shore Trail and Holliday Lake State Park. There’re large patches of several species of heartleaf, which is evergreen and can withstand cold days. There’s also plenty of running cedar and Christmas ferns. If you venture into the swampy areas, you’ll find a few bedraggled skunk cabbages beginning to emerge. Just walk and observe. You’ll be refreshed. Happy New Year from Mother Nature’s Garden!