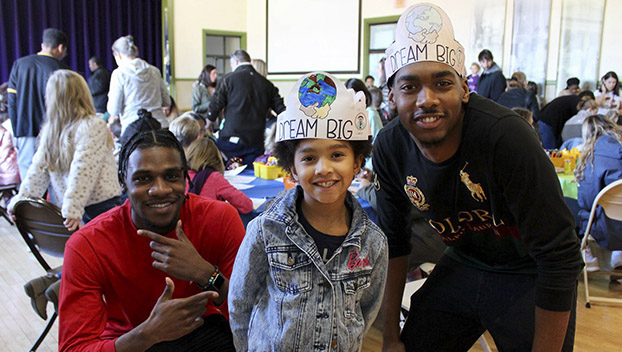 FARMVILLE – A three-day weekend right after the holidays can be too soon to plan a family trip. Luckily, numerous local organizations have teamed up to provide a fun family event.

The Robert Russa Moton Museum and the Longwood Center for Visual Arts (LCVA) are partnering with Longwood’s Office of Multicultural Affairs, the Farmville Lion’s Club and the Virginia Children’s Book Festival to bring back a day of celebration and reflection for Martin Luther King Jr. Day.

The MLK Day Free Family Workshop will take place from 10:30 a.m. to 12:30 p.m. on Monday, Jan. 16, at the Robert Russa Moton Museum, 900 Griffin Blvd., Farmville. As kids and parents have the day off from school and work, the Museum and its partners are offering family activities for an opportunity to get out of the house and remember what the day is about.

“We are happy to have people back in the museum,” said Leah Brown, associate director for education and collections at the Robert Russa Moton Museum. “It’s a community event and we’re thrilled to be able to hear voices in the auditorium again.”

During the workshop, families can come when they can as no registration is required. Families can tour the Moton Museum and learn more about the Civil Rights movement in America as well as the impact of movements that started locally in Prince Edward County. There will also be family and children’s art activities as well as a reading area provided by the Virginia Children’s Book Festival.

This will be the second time this event is held as the first MLK Day Free Family Workshop was held in January 2020. The idea was to create a space for families to come on this day off and remember the legacy and impact of Dr. Martin Luther King Jr.’s peaceful activism.

“It’s important to remember how far we have come as a country,” said Brown. “This is a chance to pause and reflect.”

The Robert Russa Moton Museum is known as the birthplace of America’s student-led Civil Rights Revolution and is now a National Historic Landmark, making it an appropriate setting for the Martin Luther King Jr. Day event. According to Brown, King visited in 1962, bringing this event in his honor full circle.

According to the Museum’s website, the Robert Russa Moton High School was where 16-year-old Barbara Johns led the 1951 Moton Student Strike in protest of segregated schools. The 1951 Moton Student Strike produced three-fourths of the plaintiffs in Brown v. Board of Education in 1954, which was the Supreme Court case that desegregated schools in America. This wasn’t the end of the fight as Prince Edward County closed its public schools from 1959 to 1964 to avoid the ruling. The Supreme Court ruling of Griffin v. Prince Edward in 1964 ordered schools to reopen.