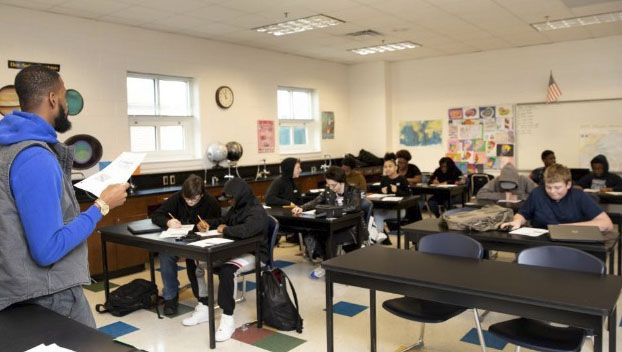 One of the members of Longwood’s Call Me Mister program works with a class for the first time.

FARMVILLE – Byron Morgan says he got involved with ‘Call Me MISTER’ by mistake.

“The way I got involved, it was all an accident,” Morgan laughs, remembering.

The Pre-K teacher remembers receiving an email about Longwood University’s Call Me MISTER program that wasn’t supposed to be sent to him. The accident, however, ended up being one of the best things that could have happened to him.

“The email came at a time in my high school life where I had no idea what I wanted to do,” Morgan says. “Call Me MISTER showed me that teaching is something I could do, and it was something I was good at.”

The Call Me MISTER program aims to prepare young, minority men for impactful careers as elementary, middle or high school teachers. MISTER stands for Men Instructing Students Toward Effective Role models. The project provides resources and support that will help move them toward successfully securing roles in classrooms where they will positively affect the lives of their students. At the helm is Maurice Carter, who helped establish the program at Longwood University in 2007.

“There is of course a shortage of teachers nationally when we think about K-12 education,” Carter said. “And there’s an even greater shortage of male teachers.”

Carter believes it’s critical to have men involved in these grades.

“It enriches the diversity of the community, of the school, and brings about an understanding that it takes all people to impact children in the classroom,” he says. “Men have that ability to inspire children to learn.”

And to be clear, there is a need. A study by the National Center for Education Statistics found that 74% of all teachers in the United States are women. Virginia matches directly with that average, as 74% of teachers in the Commonwealth are women and 26% are men.

How did ‘Call Me MISTER’ get started?

In some cases, male teachers play a key role. A study by Marian University in Wisconsin found that “the presence of male teachers may help promote alternative, non-violent and gender-equitable versions of masculinity.”

Basically, for a lot of students who don’t have male role models in their lives, teachers can fill that gap.

The report also found that male teachers “can help to break down the polarized differences that foster gender inequalities.”

And so, with a clear need established for the concept, the Call Me MISTER program was born. The project dates back to 2000, when it started as a collaboration with Clemson University and Benedict College, Claflin University and Morris College. Since, it’s grown to include more than a dozen colleges and universities across the nation. And Carter says, his men have quite the diverse background.

“We have Caucasian, African-American, and Latinx students in our program,” he says of his 16 young men. “The diversity in the program is reflected in the ethnicities of those students.”

Jonathan Spencer, one of his students, is a senior at Longwood. He believes the presence of diversity and minority male role models is imperative.

“It closes the school to prison pipeline,” Spencer says. “If students see someone who looks like them teaching and in a position of authority, then there’s no obstacle that would stop them.”

Morgan has been a teacher for the last five years in Goochland School District, one of the program’s success stories, according to Carter. There are three program alumni currently teaching in the district.

“I am the only black male teacher in my building and we have students who can see the different perspectives,” Morgan says. “It shows students that there are other positive images of black men. We can build connections, we can have conversations, and we can be ourselves.”

An incentive to get involved

There is an incentive for college students to get involved as well: the program offers scholarships. Carter says that always helps with recruitment, but their challenge right now is getting the word out sooner, rather than later.

“We want to start having those conversations with young men before their senior year,” he says. “During their middle school years, or when they’re just entering high school.”

He says it’s beneficial to invite high school students to spend time on campus, to learn what their options are in the education field. What he hopes to tackle next? Encouraging districts to recruit their own.

“There’s a greater possibility that if you introduce the man to the possibility of becoming a teacher, that he will return to that school district and become a teacher,” Carter says.

Less of the “happy accident” route that led Morgan to teaching, but Carter hopes it would  still achieve that happy ending.