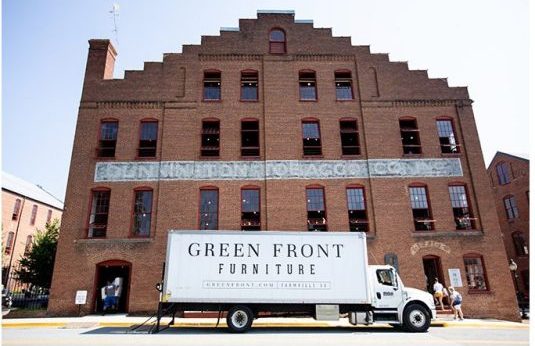 As the faded signage still indicates, Green Front Furniture Building 9 used to be part of the tobacco industry. After it became available, Green Front Owner Richard “Dickie” Crallé purchased it in the late ’80s/early ’90s for use with his business.

Now the company has provided more information on what that plan means and when it’ll take effect.

Green Front’s plans include streamlining processes with new technology. Heartland Retail, a web-based app for point of sale and retail management, and NetSuite, an integrated cloud business software suite, will ensure that all team members — from sales team to the delivery team — have access to relevant data stored in one place to better serve customers. The company’s new website will include more virtual showroom tours, featured manufacturers and future integration allowing customers to check for in-stock products and bestsellers.

In addition to unveiling new technology, Green Front Furniture will restructure departments and divisions in 2023. Green Front’s Downtown Farmville campus features 13 buildings with nearly 1 million square feet of showroom. Under the new framework, all inventory will be categorized not by building but by lifestyle, which will allow the company to create spaces that reflect the products in them and make it easier to search for particular pieces. New departments, which will still be housed in the historic buildings, will include Outdoor Living, Coastal, Made in America, Leather + Motion, Rugs, Home, Seasonal, Work + Play, and Modern.

Cralle’s plan also calls for a shift on the corporate side. Previously, the company’s three locations in Farmville, Northern Virginia and Raleigh, North Carolina had all been separate corporate entities. Now all three will be one corporation, with Cralle as the president.

“I’m excited for the next phase of Green Front Furniture,” said Crallé, who took over as president of Green Front in 2018 after serving as chief commercial officer when he joined the company in 2013.

“There’s a real sense of place here at Green Front, which is one of the main reasons we’re a household name on the East Coast,” he added. “It’s a pretty special company to be a part of. After more than 50 years in the business, we continue to advance. Raising the bar is something we all look forward to.”

The restructuring and organizational changes all went into effect on Jan. 1. Company officials say the technology integration is an ongoing process, but the biggest changes will be finished by the end of the first quarter of this year. As for the five-day workweek, that transition will be ongoing throughout the year.