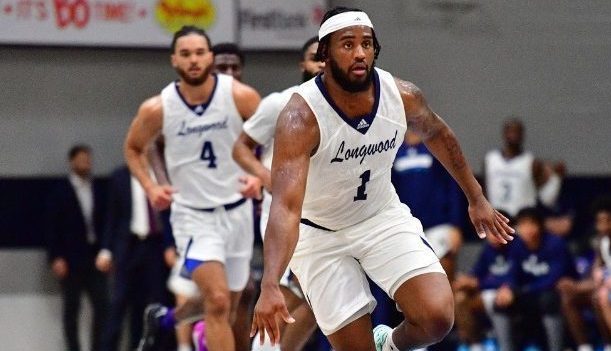 The seasoned veterans came up clutch for Longwood down the stretch with plenty of clutch moments, and Longwood (15-6, 7-1 Big South) earned a hard-fought 58-56 road win at Presbyterian.

The trio poured in 14 of Longwood’s final 18 points over the final 6:28 and refused to let Longwood lose. Every time Presbyterian threw a punch, the law firm of Wade, Watson and Wilkins had the rebuttal.

“We made plays at the end when we needed to and got key stops when we needed to,” said Longwood Head Coach Griff Aldrich. “What I told the team is that this may have been the first game—we had some dips, we had some execution issues—but this may be the first game that I felt we were really locked in and mentally focused for 40 minutes. Tough place to play, and a great win for the Lancers today.”

Longwood, by the numbers

Wilkins had a team-best 14 points, and he became the second player for the Lancers this season to score more than 1,000 points when he hit a jumper after halftime. Wade, who was the first player to score more than 1,000 in his collegiate career, added 10 points and a pair of huge threes after halftime. Watson added nine points and eight rebounds in a physical contest.

The Lancer defense also did the gritty work and limited Presbyterian (5-16, 1-7 Big South) to 56 points. It marks the third time in four games Longwood has held an opponent to less than 60 points. That effort was enough to keep the Lancers locked in step with UNC Asheville at the top of the Big South standings.

For Presbyterian, Trevon Reddish-Rhone led all scorers with 15 points, and Jalen Forrest added 12 points. However, the Blue Hose went 9-19 from the foul line in the game and 4-13 from the stripe after halftime.

“Hats off to Presbyterian,” said Aldrich. “They’ve got one conference win, but they are probably one of the hardest playing teams in the conference. They totally competed hard from start to finish. Huge respect for that team and their program. They make you have to beat them.”

The first half was a tight, physical 20 minutes. The Lancer defense forced eight turnovers and helped keep Longwood in the game despite open shots not going down. Neither side shot better than 30 percent from the floor, and the largest lead was five.

Wilkins got going late in the half and keyed a 10-3 Lancer run over the final four minutes of the half. He had seven points in the stretch as Longwood led 26-21 at the break.

“I thought the first half, the ball was really moving,” Aldrich said. “Presbyterian made it really hard. The shots we did get, they just didn’t fall. We got some really good looks. They’re a very physical team. They gum it up a lot.”

After halftime, Longwood stormed out and extended the lead to 11, but Reddish-Rhone got going for the Blue Hose. He led the charge back to within one possession, and neither side led by more than three points for the final 13 minutes of the game.

Wade drained a big three to give Longwood a 51-49 lead with 3:19 to go, his second triple of the half, but Forrest canned a three of his own for Presbyterian to retake the lead a minute later.

After the two teams traded the lead back and forth, Wilkins found Watson inside for a layup and foul, and Watson finished the three-point play to put Longwood up for good at 57-55 with 55 seconds left.

Presbyterian had chances to tie, including on a pair of foul shots with 0.7 seconds to play, but the Blue Hose went 1-4 from the foul line in the final minute.

The Lancers stay on the road and head to Radford on Thursday, Jan. 26 for the Big South Wildcard matchup on ESPNU. Tip is set for 7 p.m. The game will also be on the radio on WVHL 92.9 Kickin’ Country.

Tickets are available here for the Big South Championship Tournament in Charlotte at the Bojangles Coliseum. The tournament will run March 1, 3-5.