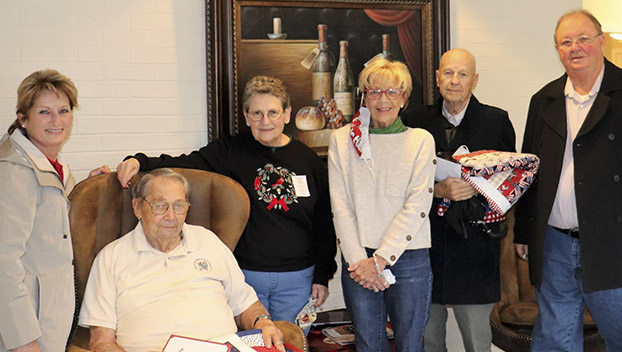 The JR-L Service for Veterans Committee presented Skinner with a Christmas gift on Thursday, Dec. 22, as a way to say “thank you” for his service to our country.

Skinner, a native of Abilene, and current resident at The Woodland in Farmville, joined the United States Navy at the age of 17 during WWII. During that time, he served on two ships: a destroyer tender and a destroyer escort, from which he saw action from Japanese airplanes. He was honorably discharged from the Navy in 1945 as a Third Class Petty Officer.

After his time in the Navy, he joined the United States Merchant Marine during the Korean War where he served in the West Pacific Theater.

But, still not finished, after he left the U.S. Merchant Marine, he joined the United States Air Force during the Vietnam War where he served in Cam Ranh Bay. He retired from the Air Force in 1976 as a Tech Sergeant.