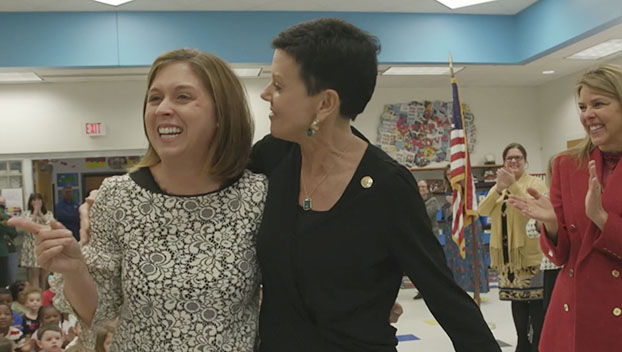 CUMBERLAND – Heading into a new year, many of the local departments, agencies and community service providers in Cumberland County are off to a strong start. However, at the first Cumberland County Board of Supervisors meeting of the year, one organization gave the unfortunate news that it’s closing its doors.

In June 2022, Madeline’s House, or Southside Center for Violence Prevention (SCVP), lost its state funding from the Virginia Department of Criminal Justice Services (DCJS). The SCVP and the DCJS worked through several issues the SCVP was facing, including an incident in March 2022 where proper protocols were not followed during a victim’s appointment.In the end, DCJS decided to pull its funding which made up the majority of Madeline’s House’s funding.

According to Kathleen Mahoney, president of SCVP, due to this loss the shelter had to close its doors on Nov. 23, 2022. Since Cumberland County was a financial supporter, Mahoney attended the meeting to inform them of this closure.

On a brighter note, Superintendent Dr. Chip Jones updated the board on the recent school happenings. According to his report, students and staff at Cumberland County Public Schools were recognized for great accomplishments.

Pamela Stepko, the math intervention teacher at the elementary school, was named as the 2022 Milken Award Recipient for the Commonwealth of Virginia. You can read our story about her award and the assembly held to surprise her here. Several distinguished guests were on hand, including First Lady Suzanne Youngkin and State Superintendent Jillian Balow.

“If you’re not familiar with (the award), that’s like the Golden Globes for educators,” said Jones. “She was the only one from Virginia and it was right here in Cumberland County.”

Students in Cumberland schools were recognized for accomplishments including the JROTC for taking part in the Wreaths Across America at Trinity Memorial Gardens and the Cumberland Lady Dukes for winning the basketball tournament held over the Christmas break. The boys team finished as tournament runner-ups.

The Cumberland Public Library is starting the new year off strong as the work from the energy grant project is complete. Now, the four heat pumps are replaced as well as the lights switched to LEDs and a new water heater.

“And we got all of that done for less than replacing the two heat pumps, so we were very happy about that part,” said Lisa Davis.

Library services are continuing as usual as COVID-19 test kits are still available for one per person. The new privacy pods, now with an interior handle, are getting a good amount of use as they had 111 users last year with more already in January. These pods are available for folks for education, job interviews, telehealth meetings and other private conversations.

Currently, the library is raising money through their Sockathon. Residents can go to the library’s website or Facebook page to purchase Foozy’s socks that come in a variety of fun patterns. Half of the money from the purchased socks will go to the library to buy books for community events. Another fundraiser is coming up as they plan for the Sweets and Stats basket fundraiser on April 29 with more information coming soon.

Cumberland Fire and EMS looks ahead

Meanwhile, the new fire chief, Andy Aigner, has jumped right in. He explained to the board that December was a busy month with Winter Storm Elliot blowing over a 70-foot pole, knocking out power for 75% of Cumberland residents and all of Farmville during Christmas weekend.

Looking forward, Aigner has met with the volunteer chief to put together a budget for fiscal year 2023 as well as vision and mission statements for the fire department. He plans to have those ready for the February board of supervisors meeting.

New procedures are also in the works, including having critical patients on scene for 10 minutes or less and non-critical patients for 20 minutes or less to get to the hospital quicker. As hospitals are becoming overcrowded, he is working with the Virginia Hospital Alerting System that hospitals can put in if they’re overcrowded or overburdened so the rescue squad  can take those who need medical care to a different location to get the help they need.

“Hopefully that will speed up our turn around process as well,” said Aigner.

The department was also able to get the Radiological Emergency Preparedness Grant which gives $2,100 this year and $700 each year moving forward. Under this grant, the department could procure the I Am Responding app to give real time updates of who is answering calls and connect with Amelia and Powhatan, who have the same system. It also allows them to become a American Safety and Health Institute training site to train people in CPR themselves and give firefighters more training to take care of emergencies when the paramedics have not arrived yet.

VDOT continues to keep an eye on the roads

Scott Fredrick of Virginia Department of Transportation (VDOT) echoed Aigner’s report of a busy December due to the winter storm. Christmas weekend was also a busy time as VDOT worked to clear the road of trees and debris.

Along with cleaning up winter storms, VDOT is taking care of usual maintenance by cutting trees back, spotting gravel on certain roads, filling potholes and cleaning gutters with more drainage clearing expected during the spring.

A resident in District 3 sent a letter that Fredrick read,  asking if the speed limit on Route 60 East could be addressed where it goes from 35 to 55. According to Fredrick, he believes this area had already been studied. However, according to Board Chair Brian Stanley, there has been a fatality on that end of that road.

“That’s certainly something we do not want to see,” said Fredrick. “I think it was studied within the last year if I’m not mistaken… but I will look into it and I will respond.”