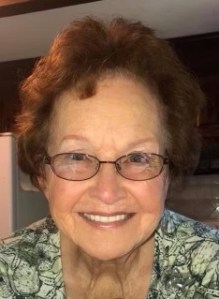 On Sunday, Dec. 18, Wynelle Champion Fox was carried in the arms of angels to be with her Lord and Savior, Jesus Christ. Known for her loving disposition and kindness to all, she was treasured by anyone who knew her. Born and raised on a farm in rural Oakfield, Georgia, Wynelle was the daughter of Clyde Champion and Mattie Sutton Champion. She adored her parents, and they instilled in her a love of church and family.

After graduating high school, she met and married a handsome young Air Force Sergeant stationed in Albany, Georgia. After his military service, they moved to the groom’s home state of Virginia.

Wynelle grew up on that Georgia farm with her three sisters, who remained best of friends throughout the years. Whenever they got together, you would be caught up in the love and laughter in the room as they reminisced about their childhood mischiefs and life in general.

She was preceded in death by Eleanor Champion Hawks and Betty Champion Ensell.

She is survived by her baby sister, Vivian Champion Sullivan.

Wynelle was devoted to her family and her church, Heritage Baptist. One of her greatest joys was helping with Vacation Bible School. She would have her grandchildren stay with her that week so they could attend/help with VBS. That’s a treasured memory that her grandchildren love to talk about often.

Freeman and Wynelle, upon retirement, purchased a second home in Florida where they spent late fall and winter months. They were fortunate enough to be able to travel back and forth for 24 years. They were just as involved in church and community during those months they spent in Brooksville, Florida. Wynelle’s passion for quilting soared while there and she so enjoyed her quilting groups there and at Heritage Baptist in Farmville. Every family member was gifted with a special quilt made just for them by her loving hands. She even made a special veteran’s quilt for Freeman that was displayed during the service.