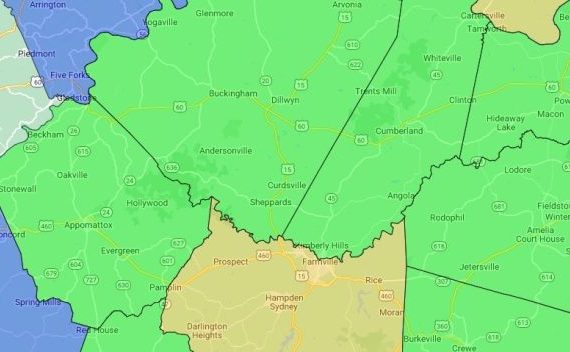 “Please prepare your home for a hard overnight freeze”. That was the statement Southside Electric Cooperative (SEC) officials released just before 10 p.m. Friday, warning residents across the region to take precautions as we continue to feel the effects of Winter Storm Elliott.

And they weren’t wrong. By 1 a.m. on Christmas Eve, the temperature dropped to 7 degrees, with a feel of -4 thanks to the wind. That wind, gusting on Friday to 50 mph at times, knocked down trees, pushed over power lines and even took down the Farmville town Christmas tree. And that was no easy task, considering it had been secured with guy wires.

But while the tree can be put back up, cleaning up from the rest of the damage will take a bit longer. SEC officials say that as of 2 a.m., 5,418 homes remain without power in their coverage area. Most of those are out of our area, with just four SEC powered homes left without lights in Cumberland and 138 in Prince Edward County. The Cumberland effort is especially impressive, considering that as of 7 p.m. Friday, 73% of SEC customers in the county were without power. Now that’s at 0.3%.

SEC officials cautioned that due to the nature of the damage, and the fact wind gusts were still hitting 30-40 mph in the early hours of Saturday, they couldn’t say when all customers would get their lights back on.

“Estimated restoration times are still unavailable, due to the widespread outages,” SEC officials said in their latest statement. “We are restoring outages with each hour that passes, but some of our members will still be without power going into [Saturday].”

SEC had 21 crews still working overnight, with power restored to 11,059 homes so far.

But SEC isn’t the only company powering homes in Buckingham, Cumberland and Prince Edward counties. Dominion also has crews out, clearing trees, repairing lines and working to get the lights back on. They still have some work left. As of 2 a.m., 832 Dominion customers in Prince Edward County were in the dark. In Buckingham, the number stood at 202, with 67 homes in Cumberland still without power.

Dominion officials said their crews are out working to get everyone’s power back on as soon as possible. But, just like SEC, they couldn’t give an estimated time. Part of that is due to weather conditions. According to the National Weather Service, wind gusts are expected to stick around in Prince Edward and the surrounding areas, hitting up to 31 mph through the morning hours. That adds an element of the uncertain, until the winds die down.

“We understand that power outages are disruptive, especially during the holiday season,” Dominion officials said in a statement. “Our crews will continue working until everyone is back on.”

Now for people who are without power and need somewhere to go, we’ll be updating our Facebook page to detail which warming shelters are opening up. On Friday, Prince Edward County opened the Sports Arena for those without power. If that or others become available this morning, we’ll provide information about them.

Storm’s effects to stick around?

Even after the wind dies down, that doesn’t mean Winter Storm Elliott will be leaving. The National Weather Service out of Blacksburg says we’ll keep feeling the storm’s effects into Sunday at least.

But the biggest concern is Saturday night, when temperatures are expected to drop to 5 degrees. National Weather Service officials advise people to limit their time outside tonight. And if you do have to go out, wear winter clothing and gloves.