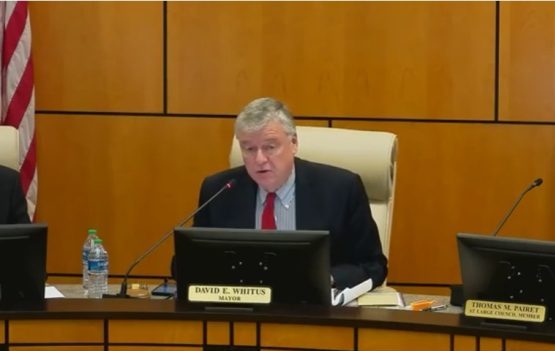 FARMVILLE – For his last regular town council meeting, outgoing Farmville Mayor David Whitus looked to the Bible. Specifically, he pointed to Ecclesiastes 3 as a way to explain both his time in office and reason for leaving.

“To everything there is a season and a time for every purpose under heaven,” the chapter begins.

That’s how Whitus sees things as he ends a final month in office.

“I firmly believe this concludes my season of service to the town and it truly is service,” he told those gathered for the Wednesday, Dec. 14 town council meeting. “Here we are. The last meeting of 2022 and my last, at least regular, meeting as mayor. It has been a remarkable journey.”

The mayor reflected on his political career in Farmville, one that started in 1998 and lasted a full 25 years.

“I only intended to serve a few years,” Whitus said. “And here we are, 25 years later. I am truly grateful to the citizens of Farmville who have elected me six times. Thank you for the trust and the confidence you placed. And I assure you it was not taken lightly. My gray hair proves that.”

Whitus also celebrated the growth Farmville has seen over the last 25 years. He recalled more than a decade back, when Farmville’s debt stood at $22 million. Now it’s $5.7 million. He looked at new partnerships built and new traditions starting up, like the town tree lighting ceremony.

“We have worked really hard to make Farmville a better place to work, live and play,” Whitus said. “I have always said Farmville is unique and I truly believe that from the bottom of my heart. You will find no other municipality that is like Farmville. We’ve accomplished a lot. firmly believe there is a solid foundation to build on.”

The key, Whitus said, comes with the mindset that town council members and staff approach their jobs with. Everyone’s goal here is to make Farmville a better place to live, work and play. No one, he said, comes in with a party or political agenda. In fact, Whitus said, people outside of the county could learn a thing or two.

“I think if our folks in Richmond worried about what was happening in Virginia and folks in Washington worried more about the nation than their political parties and agendas, the whole world would be a better place,” Whitus said. “Maybe Farmville can be a model for that.”

“We have been able to have good discussions,” he said. “When all is said and done, and the vote’s been taken, if you end up on the short end of the stick, we still walk away patting each other on the back and working together. That’s the type of relationship a governing body should have.”

Cole added that it’s been a privilege and honor to serve for the last eight years on council, using his God-given talents to help the town.

“We have gone through a lot in the eight years I’ve been here,” said Cole, the 28-year town resident. “Our town has transformed under the leadership of the best mayor Farmville has ever had.”

Other council members and members of the public echoed that. Longwood University President W. Taylor Reveley IV said he felt Whitus’ time as mayor will go down as some of the most consequential years in Farmville’s history, due to the growth and development that’s taken place.

“Where there is vision, things thrive,” Reveley said.

Farmville’s Mayor-elect Brian Vincent said that through working with Whitus and Councilman Cole, there’s been a lot of opportunity to learn and grow.

“We’ve had an interesting last four years as a community and as a council,” Vincent said. “The mayor’s leadership during this time was amazing to watch.”

Both Whitus and Cole received a resolution of appreciation from the council, for their service to the Town of Farmville. Because he served 25 years, first as a council member and then as mayor, Whitus received one more item during the meeting.

Every Farmville employee that reaches the 25-year milestone receives a watch. Whittus, an avid watch collector in his own right, received his own version at the meeting.