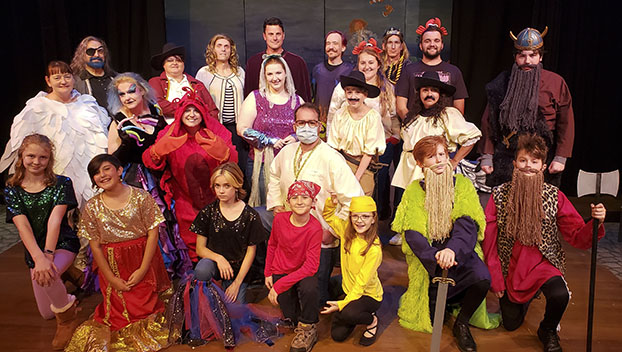 A look at the cast of this weekend’s pantomime performance

FARMVILLE – This weekend, the Waterworks Players will perform “The Little Mermaid” for local residents. But even though most know the story, this version is a bit different. It’s being done as a pantomime, which means anything is possible.

Pantomines, also called pantos, are a bit of musical theater. They became popular in England during the 17th century as part of the Christmas season. Across the United Kingdom, the pantomime season runs from November through February. And no, contrary to what many Americans might think when hearing the name, the performance does not involve mimes.

The director for “The Little Mermaid” is Mary Jo Stockton, who has been directing the pantomimes for Waterworks Players for the past 10 years. Stockton is originally from Glasgow, Scotland and grew up with this tradition. Living in the United States, she was disappointed that her daughter wouldn’t grow up with this fun tradition as she had. Already being a part of the Waterworks board, Stockton brought the idea up to try and 16 years later Farmville and the Players are in love.

“There’s lots of ad libbing and audience participation,” she said. “It’s a great introduction for young kids because they don’t have to sit down and be quiet. They can be part of the magic.”

What makes a Christmas pantomine different?

What makes these plays different is the audience participation and the humor. According to Stockton, many people in the audience come dressed in costumes prepared to participate in the story. Pantomimes are well-known stories or feature well-known characters to help the audience know what’s going on, or at least what is supposed to. Many times the plot is basic and gives the actors the opportunity to add relevant jokes and bring the audience in without worrying about distracting from the overarching story.

According to Stockton, pantomimes in Europe are performed in every theater. At the big theaters, many well-known actors have taken part, including soap opera stress, pop stars and Sir Ian McKellen. The Waterworks Players have seen success as well so many of this year’s shows have been sold out or close to it.

“Over in Britain, actors have steady jobs during panto season,” said Stockton.

The Waterworks Players are not the only American theatre group doing pantomimes. These plays are slowly making their way here as bigger performances have taken place with known performers like Neil Patrick Harris and Ariana Grande.

Along with “The Little Mermaid” they have done classic fairytales but also some mishmashes including “May the Farce be with You” which combined Star Wars-inspired characters and Jack and the Beanstalk and another where Star Trek-inspired characters found themselves in fairytale land.

The pantomimes have a basic structure with music, gags, romance and action, so even though Waterworks has purchased their scripts each year, some of the actors want to write their own.

“It has definitely started to take off in America,” said Stockton. “We always have an amazing turnout and it’s a great introduction to get people interested in the theatre.”

When will Waterworks Players perform?

Here in Farmville, the Waterworks Players will have three performance of “The Little Mermaid” this weekend. The first is Friday, Dec. 9 at 7 p.m. The next day, on Saturday, Dec. 10, performances will run at 2 p.m. and 6 p.m. You can buy tickets by going to waterworksplayers.org. The theatre is located at 25 SMI Way in Farmville.