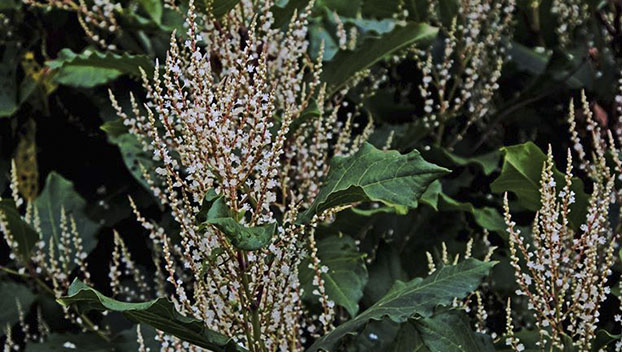 Japanese buckwheat has delicate lacy blooms and attractive foliage, but is a thug, tough and aggressive.

Since the late 15th century, we humans have moved around 13,000 species of plants from their native habitats to other areas around the world. Sometimes movement was accidental, but it was often deliberately done by plant loving humans who didn’t understand the ramifications of introducing a plant to a new area. More than 90 percent of the plant species that have become naturalized outside their home range were deliberately cultivated in residential and botanic gardens. For example: Himalayan balsam, giant hogweed, and Japanese knotweed.

Japanese knotweed (Reynoutria japonica) has been termed an alien species that just can’t be stopped. Once you have it, it’s forever. Trying to get rid of it has been compared to a medieval knight trying to take out a nuclear weapon. Japanese knotweed was introduced to Europe in 1847 when Phillip Franz Balthazar von Siebold, a German physician and botanist, brought more than 12,000 specimens back from Japan where he had found the plant growing in lava fields on the slopes of volcanoes.

He set up a company in the Netherlands to distribute his finds, and in 1847, Japanese knotweed was named the “most outstanding new ornamental plant of the year” by the Society of Agriculture and Horticulture in Utrecht. Von Siebold described the plant as virtually “inextirpable,” a virtue rather than a problem.

In 1850, he sent a female specimen of Japanese knotweed to Kew Gardens; all the current plants in the UK are clones of this plant. By the late 1800s, it had been introduced three times to North America. Two of those introductions were by Von Siebold and were clones of the female plants he had introduced to Europe, while the third arrived directly from Japan and included both male and female plants.

Japanese knotweed is a bigger problem in England than it is here. In 2012, the British government spent more than $70 million removing the plant from the site of the Olympics in East London. The value of a property with a Japanese knotweed infestation can be lowered by 10 to 15 percent. Selling such a property can be difficult unless there is a certified plan in place to remove the plants. There are even insurance policies related to the removal of Japanese knotweed.

Here in the United States, the problem isn’t as severe. It’s found in open, disturbed areas – along roads and stream banks, and on gravel and sand bars. It’s considered infrequent to locally common throughout Virginia, and its invasiveness is ranked as high. In Maine, however, it’s everywhere, and in New York state a license is required to possess, sell, or transport it.

Removal requires patience and work over several years. Just cutting the plants to the ground isn’t sufficient as they have extensive, far-reaching systems of rhizomes. The most effective approach seems to be to cut the plants to the ground, wait six to eight weeks and then apply glyphosate, thus ensuring that the herbicide reaches the rhizomes. Because Japanese knotweed can regrow from very small pieces and reaching all the rhizomes is difficult, multiple treatments over several years may be required.

In its native habitat, however, Japanese knotweed isn’t a problem. It usually doesn’t grow as large and there are insects, plant diseases, and fungi in the soil that help control it. In fact, it’s considered a useful plant. The tender new shoots are eaten raw or cooked and are said to taste like rhubarb. It’s also used in the preparation of many medicines.

When a plant is moved to an entirely new and different environment, there may be unexplained consequences. British botanists are speculating that their next big problem may be Japanese anemones. Gardeners love them because they bloom very late in the season and are tough. Who knows?

DR. CYNTHIA WOOD is a master gardener who writes two columns for The Herald. Her email address is