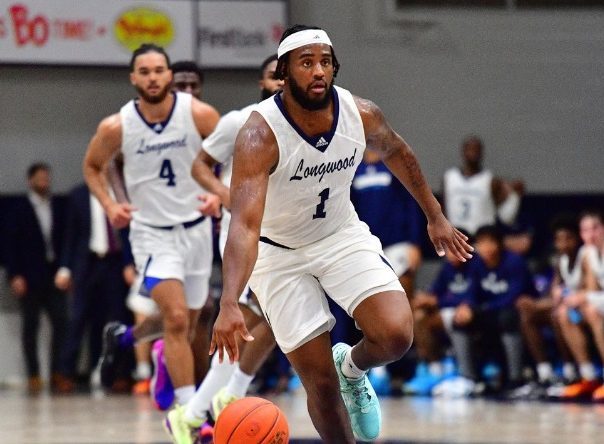 It’s all about the close. The Longwood Lancers took care of business in crunch time in the first and second half on Thursday afternoon, and the team earned an 87-73 win over High Point in Willett Hall.

It took a little grit, as shots weren’t going in for the Lancers (9-5, 1-0 Big South) in their first game back from the holiday break. The team shot only .403 (27-67) from the floor, but Longwood found a way to win their fourth straight game.

Isaiah Wilkins didn’t have much trouble hitting shots as he tied a career best with 25 points on 7-9 shooting from the floor. He tied a career high with five threes and was a perfect 5-5 from downtown.

‘Some really good stretches of basketball’

“We had some really good stretches of basketball where the guys did an incredible job creating some separation and went up 12,” said Longwood Lancers head coach Griff Aldrich. “We ended the half very well in the first. That was terrific. And then when it was a two-point game, and they extended [the lead] and responded positively again. That was a great response. I was really proud of the guys for that. That shows a lot of resilience and toughness to weather a storm and come back and get the win.”

For anyone else that missed, the Lancers pounded the glass. The team gobbled up 19 offensive rebounds, two shy of their season high of 21. Four players had at least three offensive boards.

Nate Lliteras had a monster game with 14 rebounds, and four came on the offensive end. The junior added 14 points for his first collegiate double-double, and he also blocked a pair of shots after halftime. His offensive rebound and lay-in was the dagger that put the game out of reach for Longwood.

“The incredible thing about it is that I think Nate has played his two best games in a Longwood uniform in his last two games,” Aldrich said. “He went home for Christmas, and I texted him and said, ‘I thought you played your best game ever for us against South Carolina State. I noticed you out there, you were active.’

“One of the things we have been on Nate about was being a good defender, and he was. That’s a very good offensive team [in High Point], and he sat down and defended. Nate is a shooter! And he shot 1-7 against South Carolina State and 3-9 tonight, so I wouldn’t even say he had a great shooting night, but he really impacted the game in other ways. It is a credit to him that he’s really developing into a terrific all-around basketball player.”

More stats for the Longwood Lancers

Zac Watson also chipped in with 14 points, and Jesper Granlund and Walyn Napper each added 10 points. It marked the sixth time the team has had at least four players score at least 10 points, and they needed all of them.

Zach Austin led High Point (8-5, 0-1 Big South) with 18 points and was one of three in double figures. Jaden House added 13 and Bryant Randleman had 10.

At the start of the game, Wilkins helped Longwood erase an early 7-0 hole with a barrage of threes. He hit four in the first half, and Longwood’s defense found a new gear in the final seven minutes.

The Lancers ripped off a 21-5 run that turned a four-point deficit into a 12-point halftime lead. The defense forced five turnovers, and Wilkins powered the offense with 10 points as Longwood surged ahead.

After halftime, High Point refused to go away. The Panthers slowly chipped away behind buckets from Austin, House and Randleman. HPU closed the gap to 71-69 with a 14-3 run. The Panthers went 5-5 from the floor with Abdoulaye Thiam and Austin posting five points apiece during the seven-minute stretch.

“The negative that we’ll talk about with the team tomorrow is that we had significant dips,” Aldrich added. “The exciting thing is that this team was able to go up 12, but then we immediately came out in the second half and had very little passion. We immediately threw it to the team in purple on the first possession. We are not urgent consistently. The good news is, that tells you this team can be really good if we are able to get there, but we’ve got a long way to go to do so.”

Longwood found the urgency again and finished the game off. Granlund grabbed a rebound and was fouled, and he hit a pair of shots to put Longwood up two possessions. Wade then picked House’s pocket before being fouled. He exited with an injury, and High Point chose Napper to shoot the ensuing free throws. He hit one.

The two sides traded buckets over the next two minutes, but Longwood refused to buckle. The defense didn’t allow a bucket in the final 1:50, and the Lancers displayed cool nerves on offense. Lliteras finally iced the game with a tip-in off a Napper miss for an 81-73 lead with 47 seconds to play.

Longwood hit six free throws in the final minute for the final margin.

‘We faced some adversity’

“I’m really proud. A lot of lesser teams would fold,” Aldrich said about how his team closed the game. “The other team goes on a run, and you can’t pull up and just crash. We faced some adversity, whether it was a call you didn’t like or them hitting tough shots on their run to get it back to two. It’s really easy to get down. I thought our guys responded pretty well.”

The Longwood Lancers head out on the road to Campbell for a Saturday matinee at 2 p.m. against the Fighting Camels. The game will be streamed on ESPN+ and on the radio on WVHL 92.9 Kickin’ Country.