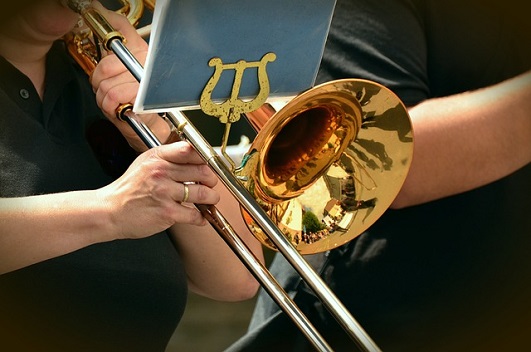 CUMBERLAND – Scott Gordon and Gary Archer have left their mark on Cumberland County. From students to teachers, parents to administrators, everyone has something positive to say about the two teachers, who are retiring after this year.

“They are both devoted to the children here in Cumberland,” said former Cumberland English teacher Barbara Gamage. “These two men have done a wonderful job for our children. We wish them well in their retirement and hate to see them leave the school system.”

Gamage and others point to the two men’s efforts to encourage a love of music in students, building up the music programs at their respective schools.

Both have a passion for the communities they serve and have worked together throughout their time serving. Together, they have over 50 years of experience teaching. As a way of saying thanks, they’ve both been named as grand marshals for this Sunday’s Cumberland Christmas parade.

“Both of them have had such a positive impact on so many students throughout the years and it is very fitting they get to lead such a joyous event,” said Chip Jones. He works as superintendent of Cumberland County Public Schools. “Congratulations Mr. Archer and Mr. Gordon, you both have earned this. Enjoy just smiling and waving.”

Finding their calling in Cumberland

Gordon and Archer explained they both have always loved music. Gordon said that his “earliest memories involved music.” He started taking piano lessons when he was only 10 and then joined the school band when he was in 6th grade.

Archer’s family also instilled a love of music in him from a young age. He too, started with band, playing the trumpet, before joining the choir when he was in 8th grade. Archer explained that he was always inspired by the “great music teachers” he had in his life. From an early age, he knew he wanted to be a teacher.

Archer and Gordon both found themselves in the teaching career, but they also both got to experience the private sector at different points in their lives. Something about teaching, though, always called them back to the schools.

“I just wanted to share the love of music with others,” Archer explained.

The right schools at the right times

For Gordon, he wasn’t sure he wanted to be a teacher forever. He took a brief break to explore the private sector but remained close to many of his colleagues. In particular, Ginny Gills invited Gordon to try and revamp the Cumberland County band program.

At the time, about 8 years ago, the program was defunct, but that didn’t deter Gordon. He actually liked the idea of being able to shape the program instead of stepping into someone else’s shoes.

After a bit of consideration, he decided to enter back into the field and developed a plan to revamp the program. Students in the program have now been recognized at the district and even the state level. Once Gordon steps away, he feels confident the program will continue to thrive.

Archer, on the other hand, found himself teaching at the elementary school level when there was an increased need for male teachers. Archer was also tasked with helping to revitalize the music program. Gordon and Archer’s missions were one in the same, to grow the Cumberland music program, but they each played different roles.

“My job was to develop and get kids to like music…smaller kids are moldable and can be influenced. You can instill a passion for music in them,” Archer explained.

He took his job seriously, helping students become invested in music the way teachers had done for him. Soon, more and more students were signing up for the band program when they entered middle school. From there, Gordon would work with the students to grow their skills.

A life of dedication in Cumberland

Gordon explained that it is an incredibly “high honor to be named grand marshal in this community I’ve helped grow.” Cumberland County is a unique place, he explained, because of the incredible support of the community.

Archer could second that, as he explained that he’s now seen generations come through his classroom.

He’s had some moments that really inspired him too, like when one parent told him he was the reason their child came to school every day. Archer said teachers don’t do the job for applause. They just want to help their community.

“Teachers never look for recognition. We do it because we love it,” Archer said. “We’re not seeking recognition, so when we get recognized, it’s just icing on the cake.”

So what happens next?

Both Archer and Gordon have dedicated their careers to building a strong music program alongside resilient and talented students. Now, they both look forward to retiring from their teaching careers.

Gordon explained that he’s always loved film scoring, and plans to become a full-time composer after the school year ends. He’s worked hard on his goal, earning a Master’s in Film Scoring from Boston’s Berklee College of Music and even being named student of the year. He’s excited about the new journey, but plans to savor every part of his last year.

When Archer retires at the end of the year, he’s planning to take some well-needed rest. He also has big plans to travel to Europe with his son to reconnect to his family history. While he plans to retire to Water View, Virginia, he knows he’ll be back to visit frequently.

For Archer and Gordon, it’s been a great joy to play such an important role in the community. They’ve been good friends throughout the journey, rooting for each other’s successes. At the parade, they’re excited to celebrate their accomplishments alongside the amazing community that will forever hold a place in their hearts.

The Cumberland County Christmas parade will take place Sunday, Dec. 11 at 2 p.m. The parade will begin at NAPA, located at 1587 Anderson Highway.