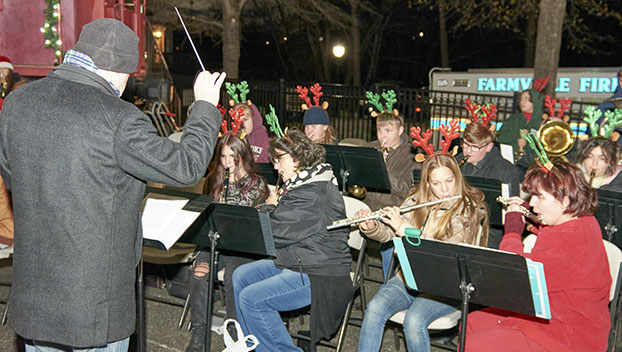 It wasn’t due to sickness or any issues like that. Instead, it was due to success. Both games were against Heritage High School, whose football team is still going strong in the state playoffs. As a result, Heritage didn’t have enough players to compete. Those high school games have been rescheduled as a doubleheader for January 24.

In case you noticed a number of officers at the Farmville Regional Airport right before Thanksgiving, it wasn’t due to a problem. Instead, a training program was in session. Several officers with Virginia Wildlife Resources brought their K9 Bruno, demonstrating tracking abilities to Farmville Public Works, Community Development and Airport staff.

The Farmville Town Council’s work session, scheduled for Wednesday, Dec. 7 at 11 a.m., has been canceled. The council will hold their regular meeting as scheduled the following week on Wednesday, Dec. 14. During that session, which begins at 7 p.m., council members will hold a public hearing to discuss an amendment that would “regulate the height of certain structures and architectural features”. The meeting will be held in Council Chambers. That’s on the second floor of Town Hall, located at 116 North Main Street in Farmville.

We have an antler total

We’d like a show of hands. Who made it out to the Town of Farmville Christmas tree lighting? As you could see from The Herald’s photos last week, Main Street Plaza was packed. Now we have a better idea of how many made it. The Farmville Downtown Partnership gave out 500 free reindeer antlers to those who attended the event. And to be clear, that doesn’t cover everyone, as some residents showed up after it started, sans antlers.

And speaking of downtown, if you feel in the mood to see some Christmas scenes, you can just walk along Main Street. Business owners have put up lighted displays, Christmas trees and other decorations to celebrate the season.

If your kids don’t share all their wishlist with Santa this Sunday, at the Farmville Christmas Parade, they’ll have another chance. Coming up next week, Sailor’s Creek Battlefield State Park will get a visit from Saint Nick.

receive children of all ages, listen to holiday wishes, and pose for photographs. Family

photographs can also be taken in an antique carriage, decorated for the holidays. The park will also have holiday craft stations set up at the Visitor Center. This event is free to the public. For additional information, call the park at 804-561-7510 or email sailorscreek@dcr.virginia.gov.