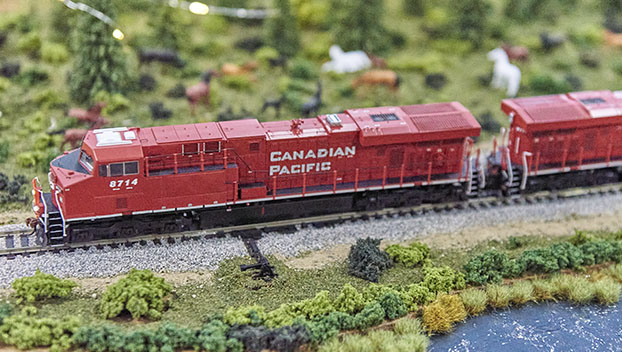 Earlier this month, we spotlighted Jim Kimbrough’s love of trains and how it led the man to build models and create his own little world inside his Farmville home. He uses tea lights throughout the layout, and he dims the regular lights. Kimbrough said it creates “a whole big Christmas flair.”

The trains also make noises and have music. Now residents will have a chance to see it for themselves, as Kimbrough and his wife Susan are opening their doors. On Dec. 11, people can come visit the Kimbrough family at 900 Fourth Avenue in Farmville from 2 to 4 p.m.

Santa Claus is coming to town

If any children missed seeing Santa at the end of the Farmville Christmas parade, they’ll have another chance coming up this weekend. Santa and Mrs. Claus will be at the Longwood Center for the Visual Arts from 11 a.m. to 2 p.m on Saturday, Dec. 10. They’ll be sitting in the front window on Main Street, waiting for anyone to come by and share a Christmas wish list or just take a picture. The elves “Buddy” and “Jovi” will be there as well.

Meanwhile, the rest of Downtown Farmville will also be turned into a Christmas wonderland. The stores have been decorated for the holiday and there will be strolling carolers wandering around the area from noon to 2 p.m.

Four football players from Hampden-Sydney College made the D3football.com All-Region squad, the team announced on Monday, Dec. 5. Junior safety Will Pickren made the All-Region First Team, while senior tight end David Byler, junior running back Melik Frost and junior offensive tackle T.J. Minter made the All-Region Third Team. All four players will be in the running for the All-America teams, which will be announced on Friday, Dec. 16 at the Amos Alonzo Stagg Bowl.

There’s a start and end date in place for work on the planned Prince Edward County Access Road. The plan is to build an economic development access road from Commerce Road to a proposed cul-de-sac within the business park near Route 628. An estimated 1,500 feet of two-lane road will be constructed, with J.R. Caskey Inc. winning the contract with a $1.99 million bid back in October. Work is now scheduled to start on the project in the spring of 2023, with everything finished by Aug. 15, 2023.