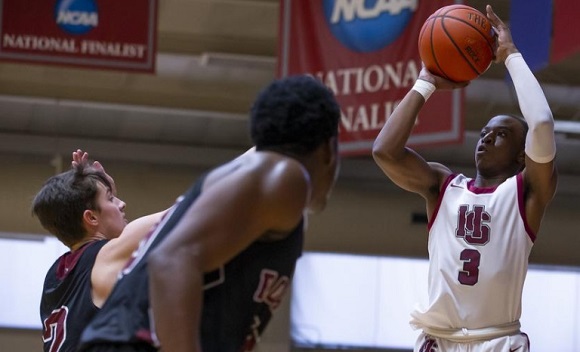 Junior DJ Wright (Greensboro, GA)added 11 points, and classmate Adam Brazil (Mooresville, NC)had 10 points for the Tigers (8-3), who led 38-17 at halftime en route to their sixth consecutive victory. Daniel Mullins scored a game-high 15 points for the Pioneers (4-5) in the contest played at Welch College, located about 30 miles northeast of Nashville.

“Total team effort tonight,” said fourth-year head coach Caleb Kimbrough. “We have had great energy in our practices and walk-throughs leading up to today and it carried over to the game. Tomorrow will be a huge test with a one-day turnaround.”

H-SC fell behind 6-5 early before getting consecutive three-point field goals from senior Chase Turner (Virginia Beach) and Blakey, each off the bench, to take an 11-6 lead at 13:50. It was an advantage that the Tigers would not relinquish the remainder of the contest, extending the quick run to 15-2 for a 20-8 lead at 9:50 following a layup by Wright.

Blakey added a conventional three-point play, while Clements added a free throw and a three-pointer, as well. The Pioneers closed to within 20-13, but the Garnet and Grey responded with 16 unanswered points to lead 36-13 with 3:17 on the clock. Five Tigers scored during the outburst, including Wright (4), junior Alex Elliott (Marietta, GA)(4), Clements (3), Brazil (3) and Blakey (2) toward the comfortable 38-17 halftime advantage.

H-SC got a three-pointer from Brazil for its first points of the second half and the lead was 43-20 at 18:17 after a steal and slam dunk by Clements. The Tigers maintained their margin throughout the final 20 minutes, leading 48-27 at 16:05 following a three-pointer from sophomore Ayman McGowan (Memphis, TN) … 57-36 at 10:20 after a slam dunk by junior Davidson Hubbard (Charlotte, NC) off a nice assist from Brazil … taking their largest lead at 70-38 with 6:06 remaining following another three-pointer by McGowan … before senior Harrison Taylor (Nashville, TN) finished the scoring by H-SC with a slam dunk with 24-seconds on the clock.

Clements and Blakey each led H-SC with their respective 13 points, including six rebounds and a game-high five steals by Clements, and four steals by Blakey. Wright finished with 11 points, including 7-7 free throws, along with a season-high three assists for the Tigers. Brazil contributed 10 points, Elliott had eight points, four rebounds and two steals, while Hubbard added seven points and six rebounds. H-SC shot 39% (26-67) from the field, including 39% (11-28) on three-pointers, and 79 (19-24) at the free throw line.

Hampden-Sydney closes the calendar year and its participation in the Music City Classic with another non-conference and neutral-site game against Berry (GA) College on Tuesday, December 20, at 4 p.m. ET at Welch College in Tennessee.