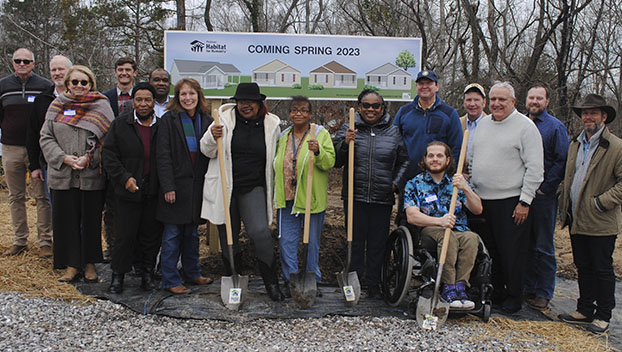 Officials from the Town of Farmville and Prince Edward County gathered on Saturday, Dec. 10 to break ground on the new Habitat homes on Andrews Drive.

Over the last few months, The Herald has detailed plans for affordable housing projects in our area. On Saturday, Dec. 10, one of those projects took a step forward.

Officials with Habitat for Humanity held a groundbreaking ceremony on the site of a new four-home development in Farmville, located on the corner of Andrews and Parkview Drive. Following a welcome and introduction of guests, including Virginia Housing, members of town and county governments, Del. Tommy Wright and Habitat board and committee members, the local Habitat staff laid out a theme for the next two years.

Called “Bold Vision”, their project will aim to build 15 homes across the region Piedmont Habitat for Humanity serves, along with at least 20 repair projects. The four homes in this development, plus one more in Farmville, mark the first builds of this new vision. Funding for this part of the project came through a number of partners, including the Commonwealth Regional Council (CRC) and the Virginia Housing Development Authority (VHDA).

Created in 1972 by the Virginia General Assembly, the VHDA is a self-supporting nonprofit. Their goal is to help people get into affordable housing through different programs. In July 2021, Virginia Housing launched a new program. Instead of working with individuals, they gave $40 million total to planning districts across the state. Each one received a specific amount and a deadline, when they needed to have construction finished.

The CRC, a planning district that includes Prince Edward, Buckingham, Charlotte, Amelia and Lunenburg counties, received $2 million. That money was meant to build 20 homes, a project with a deadline of June 2024.

To help meet that deadline, the CRC reached out to several partners, asking for project ideas. The group received six applications and ended up awarding money to three projects, partnering with Piedmont Habitat for Humanity, the Town of Blackstone and Smyth Properties LLC. Piedmont will build 11 homes, the town of Blackstone will help build three and Smyth will build six.

Now when we say a home will be placed, we mean exactly that. Habitat is trying out a different method of assembling a house, thanks to some help from Cardinal Homes. The Charlotte County based company is building modular homes, prefabricated buildings that come in sections. Habitat officials said in this case, with a deadline to meet, modular homes just made sense.

They also received help from Luck Stone, which donated gravel for the driveways, as well as Holman Masonry, Watson and Duggan, and Collins Clearing and Grading, with preparing the site.

On Dec. 10, after speeches by Prince Edward County Board of Supervisors Chair Dr. Odessa Pride and Farmville Town Council member Donald Hunter, the shovels were brought out and the official groundbreaking took place.

The modular homes should be delivered in January, Habitat officials say. And for anyone who wants to volunteer, don’t worry. There’s still plenty left to do. That includes finish carpentry, work on porches, landscaping and cabinets.

Once the Farmville homes are complete, Habitat will focus on three to be built in Crewe, and three more to go up in Charlotte by late 2023.