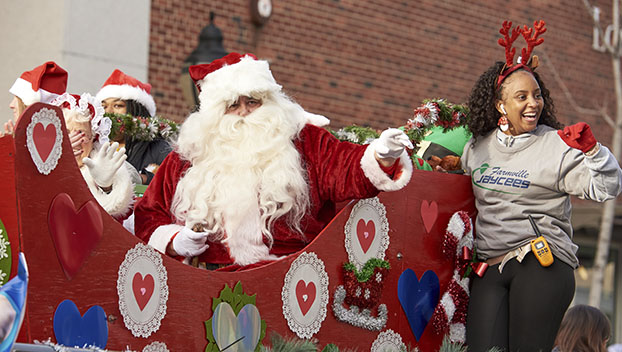 “What are you doing?” I was holding a notepad in one hand at the time, with my phone in the other. As the question came in, I had a carrot in my teeth and was reaching with my foot to pick up a pen. It made perfect sense to me, but understandably, a couple of my neighbors were a little confused when they knocked and opened the door.

The power had just flickered Friday, and so some folks had ventured down to the newspaper editor’s place, to see if he had any answers. Were we going to lose power? I didn’t know yet, I told them, but I hoped to fix that once I was off hold with the power company. Hence the need for a pen.

But that wasn’t the only thing I learned. While answering questions and writing with my phone, I also came across something that should make our entire area proud. You could say I found a bit of the Christmas spirit. I’m not talking about anything involving Santa, elves or even presents. I’m talking about how everyone responded to Friday’s power outage.

I saw someone go door to door, checking up on people without power. They offered to run and get blankets, food or anything needed. Another resident posted online, offering to cut fallen trees that were sitting across driveways. A third went up to people that she met in downtown Farmville, asking if they needed a ride to the warming shelter.

Another person shared one of the stories I wrote online, telling friends they needed to check up on one of their teachers. As soon as one resident got power back, they put an invite out on social media, telling friends and co-workers to come over and get warm.

And these are just a handful of the stories I witnessed Friday. Why didn’t I include their names and write it up as an article? Because “I’m not doing it for that” is what I kept hearing. They’d gladly take help, answers to questions and directions, although I’m not quite the guy for that last part. But they didn’t want any praise. I had to promise just to talk about their projects in general terms, to get permission to write this column.

Time after time, I ran into the same thing. I kept seeing neighbors helping neighbors. I kept seeing people offering a helping hand to folks who were complete strangers to them. It didn’t matter who you were. When the lights went out, people in Buckingham, Cumberland, Prince Edward and farther out went to work.

So often, we all find something negative to grumble about, no matter where we are. We’ll complain anytime something doesn’t go our way or changes for what we see as the worse. We all find time to yell, to scream and get angry.

But as we get all worked up, we miss the positive things happening right under our noses. Maybe, as we head into the New Year, we all need to speak less and listen more.