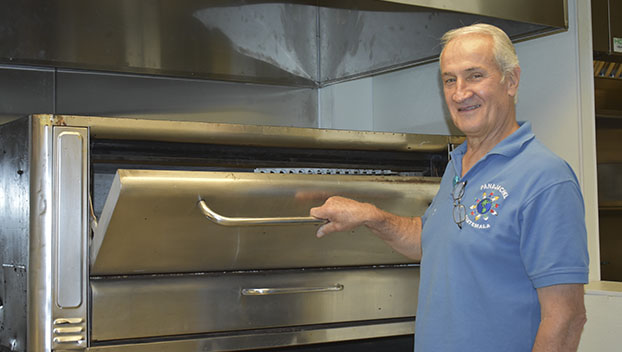 FARMVILLE – In less than two weeks, a longtime favorite Farmville restaurant will close its doors for good.

Tony Perini has operated Perini Pizza in a number of locations across town since December 1978. Over the years, many Farmville residents have come to love the restaurant’s sub sandwiches, pasta dishes and of course, the pizza.

The pizza restaurant at 308 N Main St. will be closing its doors for good on Saturday, Dec. 17. Perini is unable to renew the lease of his current location, and being 75 years old, is taking the opportunity to hang up his pizza apron and enjoy retirement. Even though Perini has attempted to retire a couple of times before, he says this time it is for real.

“It’s been a great run,” he said. “I’ve made good friends here in Farmville. I’d like to thank everyone for their support all these years.”

Growing up in New Jersey, pizza was something his mother regularly made. Since his family was Catholic, his mother would make cheese pizzas on Fridays when they couldn’t eat meat. Perini remembers his friends always wanting to come over on those Fridays because they knew his mother was making pizza for dinner. Being something he wanted to try, he opened a pizza restaurant in March 1970 in New Jersey to expand upon what his mother made in the 1950s and 60s.

When Perini was living in Richmond and working with the National Parks, he decided to look for a small town with a university to open a pizza restaurant. He found a classified in the newspaper that led him to move to Farmville Thanksgiving weekend of 1978 and open a restaurant just three weeks later.

The restaurant has held a few different locations throughout the years including High Street, the Walgreens shopping center on South Main Street and now on North Main Street.

Over the years, Perini has enjoyed proving a product that folks enjoy. Even though he is closing up shop, folks can expect to see him around Farmville after the restaurant closes.

“I’ll still be living in town, so I’ll see everyone every once and a while when I’m out,” said Perini.