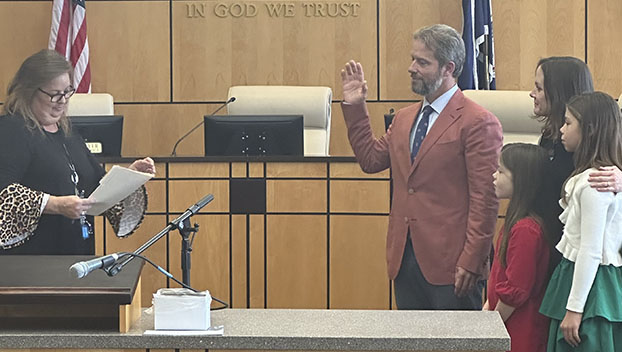 Farmville Mayor-elect Brian Vincent takes the oath of office with his wife and children beside him.

FARMVILLE – Family and friends took pictures and shot video on Monday, as Farmville Mayor-elect Briant Vincent and the other newly elected council members took the oath of office. The Dec. 5 swearing-in ceremony took place in the council chambers, on the second floor of town hall. And after each man took his turn at the podium, Mayor Vincent talked with The Herald about what happens next.

“The next step is to get together with the council members, as we’ve got some organizational things to discuss,” Vincent said.

To do that, he wants to organize a retreat once new terms start in January. The goal here would be to hear from every council member, detailing what their vision is for Farmville’s future.

“That way we can kind of paint ourselves a strategic vision, both short-term and long-term, wherever we want to go,” Vincent said.

Vincent said he wants council members to have time where they can all better understand each other’s objectives and figure out how to make them work. The High Street resident, who lives in Farmville with his wife Harriet and two young daughters, said he hopes that retreat can take place by the end of February. Overall, he believes the town is in good shape.

“Farmville’s in a good place,” Vincent said. “A lot of towns would love to have the situation we have. We just have to keep this ball rolling.”

In addition to Vincent, new council members John Hardy and Adam Yoelin were sworn in. Returning for another term, Thomas Pairet and A.D. “Chuckie” Reid also took the oath. Yoelin said he’s started building a list of issues taken from Ward B residents.

“I’ve started building a list of ideas and issues the citizens of Ward B would like me to address,” Yoelin said. “Throughout the next four years, I will remain firmly committed to good governance, held accountable by well-informed citizens.”

Adding that he’s humbled and grateful for the opportunity, Yoelin encouraged people to watch town council meetings, regardless if they do it in person or via the internet.

“Let’s do this together,” Yoelin said.

Now there’s still one meeting left with the current town council, before new members get seated. The work session, originally scheduled for Wednesday, Dec. 7, has been canceled. But the regular meeting, set for Wednesday, Dec. 14, will happen as scheduled. During that event, council members will hold a public hearing about a proposed change to the zoning ordinance. The proposal would deal with the height of signs, flagpoles and similar structures, determining what’s allowed and what’s not.