Cumberland classes get a Christmas visit: Headlines for Dec. 17 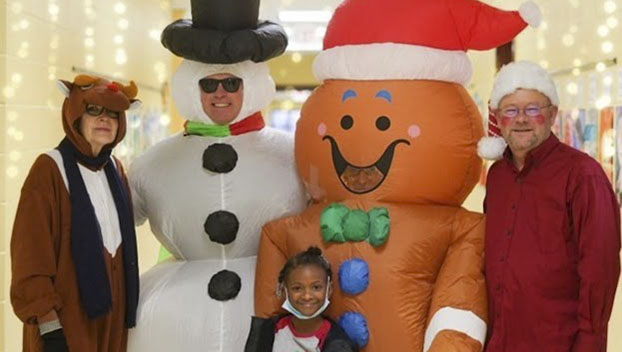 “We enjoy going to see the students and staff as they get ready to leave for break,” said Cumberland superintendent Dr. Chip Jones.

In Cumberland, as well as Buckingham, Friday marked the final day of classes. For Prince Edward County, there’s still a couple more days to go. Winter break for Prince Edward starts after a half day on Tuesday.

It’s been an eventful few days for the senior class of Fuqua School. For this year’s senior class trip, the group went to New York City. Last Thursday, they took in the Broadway play Hamilton, then walked 11 miles Friday as they visited Central Park, St. Patrick’s Cathedral, stopped in for some shopping at Macy’s, then took in a New York Rangers game at Madison Square Garden. Also before returning home, they saw the play Phantom of the Opera.

Santa Claus is coming back to Downtown Farmville later today. Last weekend, the guy in the big red suit visited and listened to Christmas wishes, while elves gave out bottled water and candy, and carolers walked up and down the street.

Now Santa is returning for one more visit before the big day. Join the Farmville Downtown Partnership at the Longwood Center for Visual Arts (LCVA) on Saturday, Dec. 17 from 11 a.m. to 2 p.m.

The LVCA, located at 129 N. Main Street in Farmville, will host Santa as he listens to Christmas wishes from children and elves will be on hand to help take pictures on your phone, so the entire family can be part of the holiday fun. Walmart has partnered with the LCVA to offer bottled water and hand out candy.

Slow down for deer

The Virginia Department of Wildlife Resources has put out a statement, asking people to slow down while driving at night. They’re concerned over a number of accidents stemming from swerving to avoid or hitting deer within the last month. To avoid that, they’re asking that people use caution when they see deer crossing signs set up by the Virginia Department of Transportation.

They also ask that people apply brakes and even stop if necessary to avoid hitting a deer, but never swerve out of the lane. That’s an easy way to lost control of your vehicle.

A white Christmas for Farmville and Cumberland?

And finally, we’re a week away from Christmas Eve, but we’re already starting to get some cautionary words from the National Weather Service. A winter storm looks like it could hit this entire area next Thursday and Friday. The question is what form that precipitation will take. Will it be freezing rain? Ice? Or snow?

What we do know is that it will be cold. Very cold. The temperature Friday night will hit 16 and then on Christmas Eve, the nightly low is expected to be 12 degrees in Farmville, with a high of 27. Will we get a white Christmas? The National Weather Service isn’t ready to say yet. But they do suggest that if you use firewood, now is the time to stockpile. And when you go outside, bundle up.