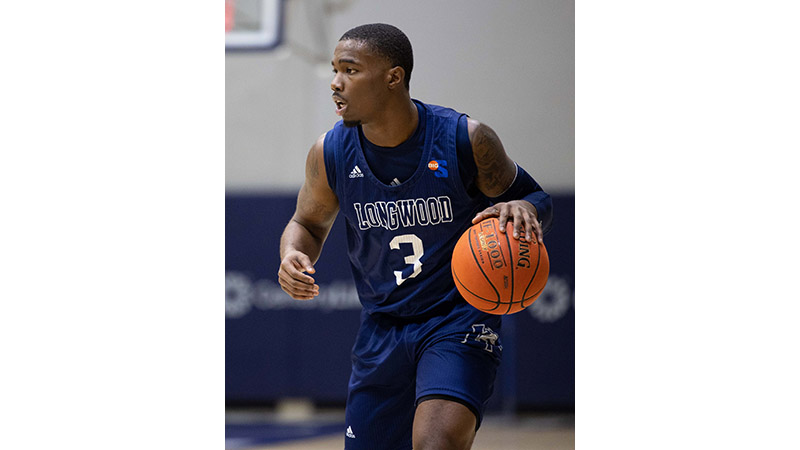 DeShaun Wade was a consistent presence for three games in three days for Longwood men’s basketball last weekend. As a result, he was named the Big South Player of the Week on Monday afternoon.

Over three days, Wade averaged a team-best 14.3 points per game while helping lead Longwood to a 2-1 record. He went 11-17 from three and 14-26 from the floor in a breakout week. In addition, he had 12 rebounds, three assists and a steal.

Against VMI to open the JK54 Classic, Wade exploded for 18 points on six made three’s. The Virginia Beach native stormed his way to a 3-3 start from three while giving Longwood a lead it would never relinquish on Friday night.

Saturday, he followed it up with 11 points on 3-5 shooting from the floor in a 99-83 win over Fairleigh Dickinson. He nailed all three of his triples and chipped in six rebounds.

Sunday, he led the Lancers with 14 points in a tight loss against Southern Illinois University Edwardsville. The graduate student helped key a second-half Longwood rally with a pair of three’s, and he chipped in defensively as well to hold SIUE to six made shots in the final 20 minutes.

On the season, Wade averages 8.3 points per game, and he has hit a team-best 12 threes. He was named to the Big South Preseason All-Conference Second Team in October.

Wade is the first Lancer to be named the Big South Player of the Week this season.

The Lancers wrap up a five-game homestand by hosting Mary Baldwin at noon on Friday, Nov. 25. The game will be aired on TV on ESPN+ and on the radio on WVHL 92.9 Kickin’ Country.