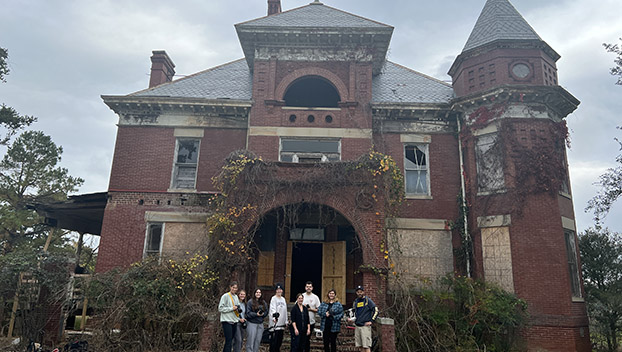 You can trace the history of Dunnington Mansion all the way back to 1748, when Richard Woodson bought 1152 acres of land from King George. A group of students from Longwood are creating a video to tell its story.

Communication students at Longwood University have two goals here. First, the assignment is to share the history of Dunnington, from the beginnings on Manor House Drive to the present. Second, the hope is for the project to raise awareness about the property and attract preservation minded buyers. Why? It will soon be listed for sale by the current owners.

A group of two professors and six students came on Wednesday, Oct. 26, to get video images of the current state of the mansion.

“I found the mansion exploring Farmville with friends my freshman year,” said Audrey Biringer, student lead of the project. “Sophomore year, I found myself returning on nice days to walk around the property, and I just felt I needed to share it with more people.”

Biringer chose the mansion to be the subject of her audio summary project her freshman year. When she had the chance her sophomore year to feature the home again, she jumped at the chance.

“Finally getting to go inside the mansion alongside my classmates, hearing their “ooos and ahhhs” as they took in the decaying, but beautiful, home was what I had been working for,” said Biringer. “I was finally able to share this beautiful piece of Prince Edward history with others, even if just a handful of classmates and two professors.”

A history of Dunnington Mansion

Richard Woodson bought the land in 1748 and built the first structure on the property. Then the home, then called Poplar Hill, was passed down through the family before being sold to Capt. John Knight in 1860.

He left the mansion to his daughter and son-in-law, the Dunningtons. It was during this time, in 1897, that the current mansion was built. Dunnington extensively renovated the home, adding on four rooms, a massive tower and stately front entrance. This also changed the orientation of the house, switching from north/south to east/west. The front of the house now faces west.

After their death in 1960, the home traded hands for the next 40 years. Then the Community Development Authority purchased the property to build the Manor Golf Course.

But the money dried up, part of the property went into foreclosure and a portion was sold. While the golf course was built in 2004, the mansion has sat empty since. Roof problems have allowed nearly 20 years of rainwater to come in and damage many areas of the home. That’s where the Longwood students come in.

A hope for repair

Heather Beach, president of The Dunnington Mansion Foundation, was thrilled when Biringer reached out to use the mansion for a class project. This project has students partnering with companies or non-profit organizations to make a video summarizing its history or promote it.

“Hopefully we can use this video to have an audio-visual synopsis for our website to tell the story from the 1700s to the present of the Dunnington Family,” said Beach.

The Dunnington Mansion Foundation is a nonprofit made of history enthusiasts and lovers of forgotten homes who are dedicated to preserving both the history of the mansion and hopefully the mansion itself. Unfortunately, the foundation does not own or control the home or the property. With the property and surrounding acres purchased by investors at the end of 2021, the foundation hopes that the new owners will be willing to partner with them and preserve the historical landmark.

“I am so very excited to see what footage we gathered and to share a deeper look into this home with the community and beyond,” said Biringer.

To learn more about the Dunnington Mansion, visit dunningtonmansion.org.