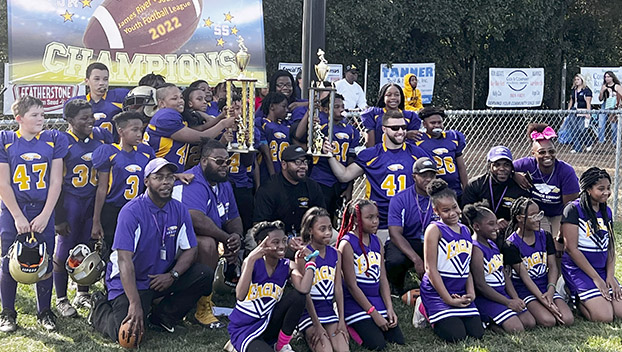 The junior varsity team and cheerleaders pose with coaches after beating Charlotte County.

Several teams from Prince Edward County are bowl bound. It’s been a great year for the Prince Edward Youth Football (PEYF) teams. All of the local teams made it to the James River Southside Youth Football League playoffs, with two moving on to their respective Super Bowls.

The flag football team (ages 5-7) finished first in their division, with an undefeated 10-0 record. They played Amelia County last weekend for the flag division championship and won 32- 6 to advance to the Flag Football Super Bowl. The news was just as good for the junior varsity team (ages 10-11), which finished first in their division at 8-2. They took on Charlotte County for the junior varsity division championship this past week, winning 20-0 to advance to the Junior Varsity Football Super Bowl.

One more Prince Edward team, from the minor division, also made the playoffs and gave it their all. The minor team (ages 8-9) finished second in their division at 6-4 and made it to the minor division championship, but fell short, as they lost 16-0 to Buckingham.

Both games will be played at Joe Paulette Park this Saturday, Nov. 12. The park is located at 8441 Recreation Lane in Amelia, with games starting at 10 a.m.