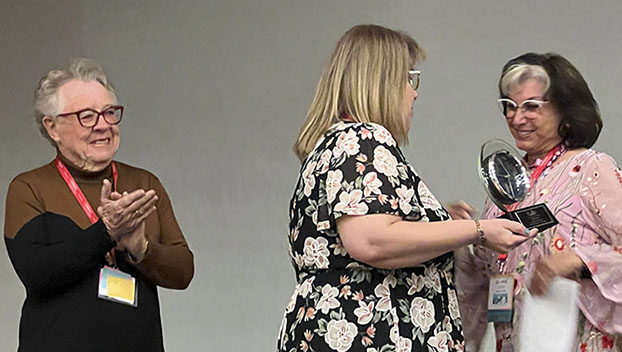 Dr. Lily Anne Goetz, professor emeritus of Spanish, recently received the Dr. Helen Warriner-Burke Foreign Language Association of Virginia (FLAVA) Distinguished Service Award. The award recognizes world language educators in Virginia who have made sustained outstanding contributions to the profession and is named for Longwood alumna Dr. Helen Warriner-Burke ’56, who presented the award to Goetz at a ceremony in Williamsburg on Oct. 7.

Jazz Wilson ’23 also received a FLAVA University Student Recognition Award, which honors postsecondary language students who possess a keen interest and facility in language. Wilson, who is from Chesterfield, is majoring in modern languages with a concentration in teaching English to speakers of second languages.

“We are so delighted to see Dr. Goetz honored for a lifetime of service and to have Jazz Wilson recognized for her potential in this profession,” said Dr. David Magill, chair of the English and Modern Languages department and professor of literatures of diversity. “We look forward to continuing to develop excellent teachers such as Jazz for the commonwealth to honor. Together, Jazz and Lily demonstrate that Longwood is the place to be for modern language education.”

The awards were presented during FLAVA’s Fall Conference. FLAVA is an organization of professionals in education and business, students, and all those who have a common interest in promoting and utilizing world languages to accomplish their various goals.

“It meant a lot to get this award and be recognized alongside some fantastic people doing fantastic things,” said Wilson, who hopes to teach English in South Korea after graduating from Longwood next spring. “Seeing their achievements inspires me to work even harder.”

Warriner-Burke’s distinguished career in foreign language education included nearly 30 years with the Virginia Department of Education. She is credited with founding the Foreign Language Academies, which are summer immersion programs in Virginia for high-school students.