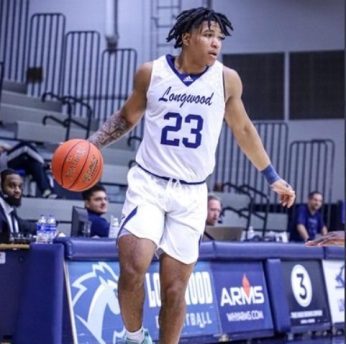 FARMVILLE – The Longwood Lancers opened up their post-Thanksgiving slate by polishing off Mary Baldwin 112-60 to wrap up a five-game homestand.

Longwood never trailed and topped 90 points for the fourth time in five games at Willett Hall.

Every player scored for Longwood behind an offense that moved the ball. The team had 22 assists on 44 made shots, and 11 players had at least one assist.

Leslie Nkereuwem led the onslaught of offense with 15 points as five players scored at least 10 points for the Longwood Lancers. He opened the game with a layup and a dunk in the team’s first three possessions.

The Lancer defense found its stride as the first half went along, and it keyed a 36-5 run that turned a three-point lead to a 43-15 lead with four minutes to go in the half.

Mary Baldwin missed its first 10 threes, and the Longwood Lancers forced 20 turnovers. Longwood turned the turnovers into 30 points the other direction.

The 112 points for Longwood tie for 10th most all-time in a game and are one point off of the program’s Division I record.

Now, the Lancers embark on a five-game road swing, their longest of the season. Longwood heads out to take on West Coast Conference foe San Diego on Monday night at 9 p.m. EST. The game will be aired on WVHL 92.9 Kickin’ Country.