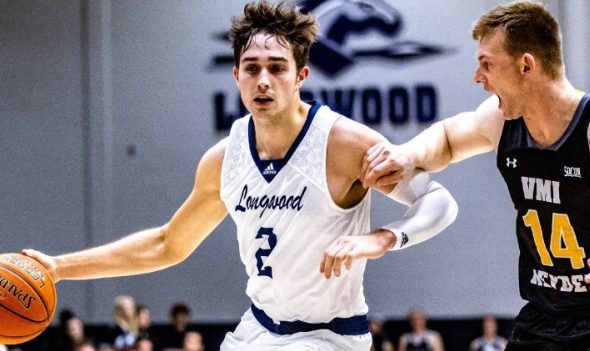 FAMVILLE – A weekend full of hoops is in full swing in Farmville following the opening game of the JK54 Classic between the Longwood Lancers and the VMI Keydets.

Longwood picked up its second straight win in front of a loud Willett Hall crowd in convincing fashion, defeating VMI by a score of 90-58. The Lancers pulled ahead early and never looked back to cap off consecutive 30+ point home victories.

Nate Lliteras led the way for Longwood, scoring a career-high 21 points on an absurd seven for seven from three-point range. DA Houston helped orchestrate much of the Lancers’ offensive success, dishing out a career-high eight assists.

“When I shot the first two, I was just playing my game, but once I made about three or four I realized I was feeling it,” said Lliteras on his career night. “My dad taught me if I’m open, shoot it…if you’re open, shoot that thing, and that’s what I live by.”

DeShaun Wade was also feeling it from three, scoring 18 points on six made triples. Longwood was spreading the wealth throughout the entire game, as 11 Lancers combined for a season-high 25 assists.

A hot start in JK54 Classic

Wade got off to hot a start for the Lancers, converting on his first three shots from outside the arc to lead the charge for a Longwood offense that was finding early success. While the Keydets cut the lead to four after an 11-2 Longwood run to open the half, the Lancers responded adequately, riding 48.5% field goal and 45% three-point percentages on route to a 46-27 lead going into the half.

Longwood didn’t skip a beat to open the second, garnering a 26-13 run through the first ten minutes of play. Isaiah Wilkins, who came off the bench to start the game, electrified the Willett Hall crowd with a highlight jam at the 13:41 mark in the frame, putting an exclamation point on an impressive Lancer run.

“One of the things we’ve been trying to emphasize with our guys is to share the ball and drive for a teammate, and your shot will be created through the offense,” said head coach Griff Aldrich on Longwood’s offensive success. “I thought tonight they did an exceptional job…that revealed itself in the 25 assists, which is just spectacular.”

Isaiah Wilkins and Walyn Napper provided a scoring spark coming off the bench, each scoring 12 points while each playing 20 minutes.

“This part of the season is about building your identity,” said Aldrich. “We’ve got new faces in the lineup, so it’s really about making sure that the identity of Longwood basketball gets back to what has made us successful in years past, which has been a very competitive, tough, and hard-working team, and I think we did that tonight.”