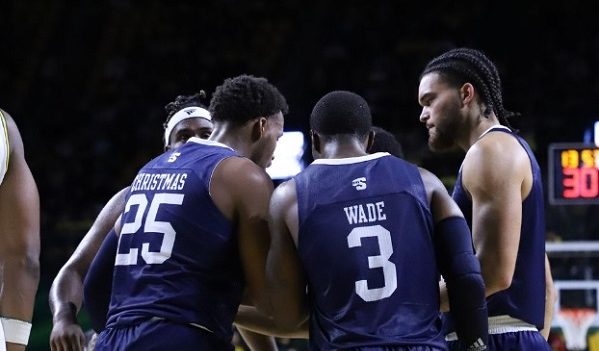 The Longwood Lancers battled and showed their grit after halftime, but a hot-shooting George Mason squad used eight first-half three’s to build a big lead. Ultimately, it was enough to take down the Lancers 83-69 at EagleBank Arena.

The Patriots (1-1) led by as much as 17 in the first half thanks to the barrage of three’s, and Josh Oduro helped hold off Longwood’s inevitable charge after halftime.

Oduro, a Preseason All-A-10 selection, tallied 14 of his 20 points in the second half and added 12 rebounds to stymie a feisty response from Longwood (0-2). He had help from Victor Bailey, Jr. and Davonte Gaines to the tune of 13 and 11 points apiece, respectively.

Longwood (0-2) refused to go away though, and the defense found itself after the first-half barrage. The Lancers battled their way back into the game with the traditional Lancer tenets of toughness and grit under head coach Griff Aldrich in front of a sizable contingent of Lancer faithful.

A tale of two halves

“It was a tale of two halves,” Aldrich said. “The first half was extremely poor. I thought we had poor execution, and we were too self-focused. Some things didn’t go our way, and I think we didn’t stay the course, we weren’t connected, we didn’t stay disciplined.

“In the second half, I’m really proud of the guys for battling back. DeShaun Wade did an incredible job leading tonight. I’m really proud of DeShaun. Our offense is a little bit behind our defense, and he’s not getting the shots. But he gave a lot to this team tonight. I’m extremely proud of that effort tonight and what he showed in leadership and character to compete on every single play. Isaiah Wilkins did a really good job of helping to lead and bring energy. He did a really terrific job.”

Wade led a defensive surge that limited George Mason to 25 points and no made three’s over the first 18 minutes of the second half. Meanwhile, Isaiah Wilkins pitched in on the offensive side. He scored a team-high 13 points, including 10 after halftime, in front of a sizable contingent of Lancer faithful. The graduate student also added six rebounds and four assists.

“That’s a far cry from what they were doing in the first half,” Aldrich said about his team’s defensive effort over the final 20 minutes. “(You see) the team that we can be. That’s the team that we are. At the end of the day, this team has a chance to be very good. But it all comes back to our culture…In the second half, I thought you saw a very connected group. A few shots go in, a few different calls, and it’s a different game.”

Lancers battle back by attacking

Ultimately, George Mason was able to hold off Longwood each time the Lancers trimmed the lead to eight. Oduro played a big part, helping seal it with timely shots and free throws late.

“The journey for this team, it’s a process,” Aldrich said. “We have to continue to stack days and stack games of who Longwood basketball is. We’re not doing that consistently enough right now. We didn’t do that tonight. We’ve got to be better at that. The team will get there. I thought there were a lot of bright spots tonight, but that’s got to be our focus: continuing to do the things we do as a program with effort, focus and attitude. That’s our focus.”

Longwood heads back home for the team’s home opener against Pfeiffer University on Sunday afternoon at 3 p.m.

The team will hold a special pregame ceremony prior to the game to unveil the team’s Big South Championship banner and an NCAA Tournament banner. In addition, the first 100 students to the game will receive free Bojangles. The game will be aired on ESPN+ and on the flagship home for the Lancers, WVHL 92.9 Kickin’ Country.