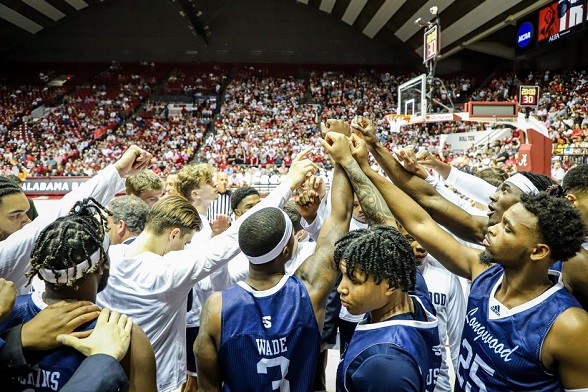 Longwood men’s basketball put up a fight on opening night, but 20th ranked Alabama flexed its muscle after halftime to take down the Lancers 75-54.

It was a physical, bruising match that saw the two defenses lock out their offensive counterparts for stretches. Longwood (0-1) held Alabama (1-0) below 40 percent shooting from the floor, but the Crimson Tide returned the favor and limited Longwood to below 30 percent shooting.

Ultimately, Alabama’s size wore down the Lancers. The Crimson Tide grabbed 22 offensive rebounds that led to 19 second-chance points. Four players had at least 10 rebounds for Alabama, with projected lottery pick Brandon Miller leading the way with 14 points and 13 rebounds.

“Alabama is obviously a very good team,” said Longwood Head Coach Griff Aldrich. “They’re ranked for a reason. The athleticism and the length that they have, it is hard for us to simulate. You get to the rim and it is not just one guy, its three or four guys there. That is just a different experience for our guys to come in and compete against that.”

Michael Christmas provided a source of offense for the Lancers in his Longwood debut. He totaled 12 points and hit Longwood’s first shot of the season, a three, to take a 3-2 lead in the game’s opening minutes.

The defenses kicked in from that point and turned the first half into a grind.

The Crimson Tide slowly built a double-digit lead, but the Lancers stuck around thanks to a stiff defense that forced 12 Alabama turnovers. Christmas added a timely bucket or two.

Alabama put together a spurt over a four-minute stretch to extend the lead to 30-14, but Longwood refused to go away. Over the final four minutes of the half, Longwood cut the lead in half. The defense kept generating stops, and the offense perked up.

“I thought we did a really good job, particularly in the first half,” Aldrich said. “They went up 16 or so, and one of the keys we really talked about was trying to stay the course and be mentally tough. I thought they had tremendous mental toughness to do that and get within eight at the half.”

Nate Lliteras canned a three, and Jesper Granlund added another one on the next possession. Leslie Nkereuwem capped the mini-run with a turnaround jumper to cut the lead to eight, and the two teams traded baskets over the final 90 seconds of the half. Alabama led 34-26 at the break.

‘We need to learn from this’

At the beginning of the second half, the two defenses again clamped down. However, Charles Bediako and the rest of the Alabama bigs grabbed enough offensive boards, and another standout freshman, Jaden Bradley, added 11 points after halftime to provide some separation.

“I told the guys afterwards, I thought a lot of our errors were not necessarily physical but mental,” Aldrich said. “I didn’t think we were urgent enough to execute, particularly on the defensive end. When you don’t do that, when you play a top 20 team, they are going to punish you. And they did. We’ve got to be more crisp and more urgent to execute on the defensive end.

The Lancers rallied and trimmed the lead to 13 twice but could never get closer the rest of the way.

“We need to learn from this,” Aldrich said. “We’ll watch the film and evaluate what we can do better and then talk to the guys. Then we’ll have to turn the page pretty quickly to go play a tough George Mason team up in Fairfax.”

Longwood heads to George Mason on Friday night. Tipoff is set for 7 p.m. The game will be aired on ESPN+ and on the radio on WVHL 92.9 Kickin’ Country.