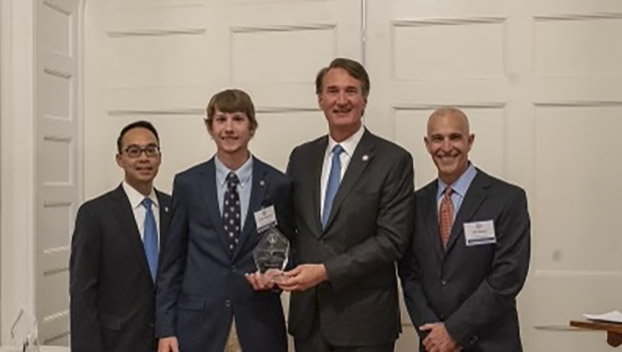 Governor Glenn Youngkin presents the Volunteerism and Community Service Award to Justin Stimpson at the Governor’s Executive Mansion on October 25.

CUMBERLAND – Receiving an award from the governor is a rare honor. Only a handful of people get that opportunity each year and every one of them has earned it by helping make their community better in some way. For Justin Stimpson, that accomplishment came by continuing to help out students at his old middle school.

Stimpson, a graduate of Cumberland County Public Schools and a current senior at Hampden-Sydney College, received the 2022 Governor’s Volunteerism and Community Service Award in October as the Outstanding Young Adult Volunteer.

“It is my pleasure to recognize these honorees for the positive impact they have had on our Commonwealth and in the lives of their fellow Virginians. Each honoree has demonstrated resilience, generosity and commitment, exemplifying the remarkable spirit of Virginia,” said Governor Glenn Youngkin.

His comments were echoed by Virginia Department of Social Services Commissioner Danny Avula.

“Healthier communities rely on the power of community service to create and support places for all to thrive. The volunteers recognized this year, along with all who are called to serve their communities in this capacity, are a critical part of meeting the diverse needs across the state that are the foundation for a stronger Virginia,” Avula said.

On Tuesday, Oct. 25, Stimpson attended the award ceremony at the Governor’s Mansion in Richmond and received recognition as the Outstanding Young Adult Volunteer from Gov. Glenn Youngkin.

“I was very surprised, but I was very honored to be able to accept this award,” said Stimpson.

What was Justin Stimpson’s project?

Stimpson received the award due to his involvement with the Cares for the Kids Taking Flight program. This program promotes good behavior in students at Cumberland and Prince Edward Middle Schools. Teachers and staff at the middle schools can nominate students based on their hard work, positive behavior and attendance to enter a raffle for a new bicycle donated by the Hampden-Sydney College Cycling Club.

The club receives donations of new bikes and safety equipment for this raffle from sponsors including Omicron Delta Kappa (ODK) and other clubs and organizations on campus, as well as community sponsors like Walmart.

To be a part of this program, Justin Stimpson was approached by Director of Student Affairs at Hampden-Sydney College Sandy Cooke during his freshman year. As a member of the Cycling Club and having attended Cumberland County Middle School, Stimpson took the opportunity to share his love of cycling with middle schoolers who needed encouragement. Over the past four years, the program has given away around 90 bicycles and plans to give away 20 more at the end of this school year to both middle schools.

“I’m really big into cycling so getting the opportunity to share this with young kids really interested me,” said Stimpson. “Seeing the looks on these middle schoolers’ faces when they get the new bike they wanted for a good deed they did makes it all worth it.”

Justin Stimpson has spent numerous hours helping the program by assembling bikes, repairing bikes and participating in the ceremony giving these bikes to the honored students. Stimpson was nominated for this award by Cooke and by Cumberland County Superintendent Dr. Chip Jones.

“This is a true example of one of the VA Profile of Graduate competencies — citizenship,” said Jones.

“Justin gave back to a community that supported him through his time at CuCPS and prepared him for life after graduation. It is important for our students to see our alumni and all that they are doing. Great things are happening in rural Virginia and they need to be in the spotlight.”