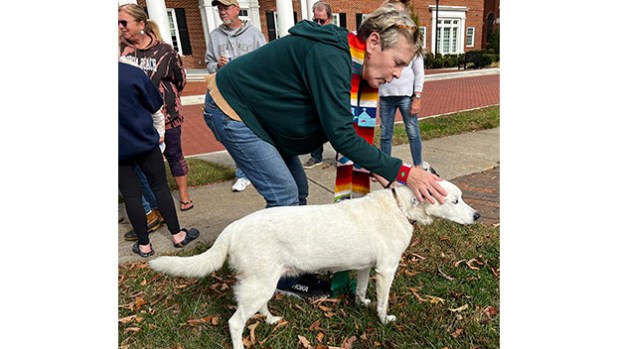 Farmville United Methodist Church’s Rev. Susie Thomas visits with a dog at the blessing of the animals. 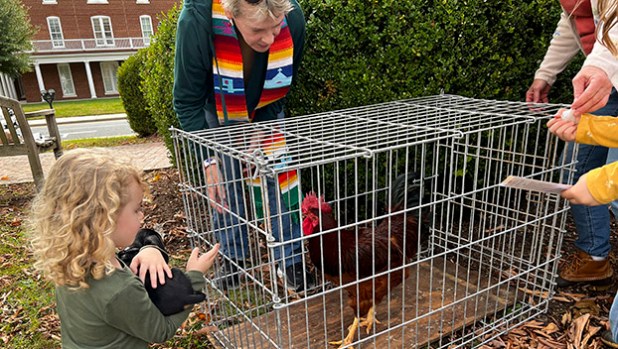 A young girl sits near her rooster as Rev. Thomas blesses it. 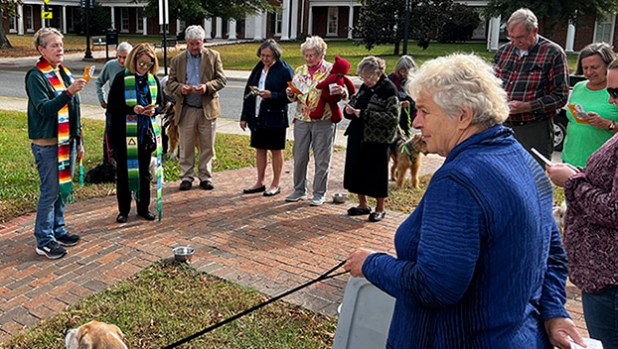 Members of both Johns Memorial and Farmville United Methodist Church gather to read a blessing from the handout provided at the ceremony. 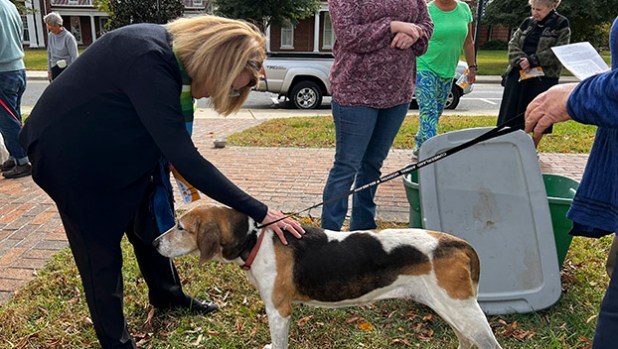 A Farmville resident’s dog receives a blessing during the ceremony.

The first ceremony happened in 1210. No, that date isn’t wrong. St. Francis of Assisi first blessed animals early in his ministry and the tradition has continued through the centuries. Some churches here in Prince Edward County are among those who practice the method, especially in late fall, around the time of St. Francis’ birthday.

Here in Farmville, you can witness the ceremony performed at Johns Memorial Episcopal Church and Farmville United Methodist Church.

“This is a statement of God’s love for all creation,” said the Rev. Susie Thomas of Farmville United Methodist Church. “From farm animals to the domesticated ones that we share our lives with.”

This is a somewhat new addition for the United Methodist Church. While the worldwide Episcopal church has been performing the blessing for centuries, Methodists only started within the last 20 years.

WHERE DOES THE CEREMONY COME FROM?

This ceremony celebrates the animals people interact with every day in their lives and serves as a reminder that they are a special part of God’s creation. It originated in honor of one of the patron saints, Saint Francis of Assisi. Saint Francis was known for his love of nature and having a special closeness with animals, including being friends with birds and wolves.

It’s said Francis’ love of God flowed into a love for all of God’s creatures. He preached sermons to animals and insisted that everyone and everything are brothers and sisters under God.

Each year around his birthday Oct. 3, various churches hold a Blessing of the Animals to remember the importance of animals as part of God’s creation. This time around in Farmville, it was held on Sunday, Oct. 23 in the parking lot of Johns Memorial. This was a little later than Saint Francis’ birthday due to inclement weather during the original weekend. On the grassy lawn of John’s Memorial Episcopal Church on High Street, community members brought their pets and animals for a special blessing.

What is it like? Well, the best way church officials describe it is a bit chaotic. A priest reads the blessing, then sprinkles the crowd, both human and animal, with holy water. The chaotic part comes from what the animals are usually doing during this time. Most are more interested in making new friends or getting attention from the crowd.

WHAT ANIMALS ARE INVITED?

Throughout the years for this event, many people bring their dogs and cats. However, the blessing is open for any animal including horses, birds, turtles, fish or any other special animal. Those with more nervous animals had the opportunity for a drive-through blessing. According to Thomas, she is open to blessing whatever animal folks bring her way.

Along with a spiritual blessing, the ceremony also makes a point to take care of the animals’ physical needs and well-being as well.

“This event is also to bring awareness about taking care of our animals to keep them safe and healthy,” said Thomas.

Those who come to the event can pick up informational pamphlets from the Society for the Prevention of the Cruelty of Animals (SPCA) about the how and the importance of spaying and neutering. Along with the information, those who come for a blessing are encouraged to be a blessing themselves by bringing a donation of pet supplies for the SPCA, which is overwhelmed with a post-pandemic influx of animals.

No matter the animal, the blessing serves as a reminder to remember that they are a part of God’s design and need to be treated with love.