Why is VDOT’s deadline shifting for the Kingsville roundabout? 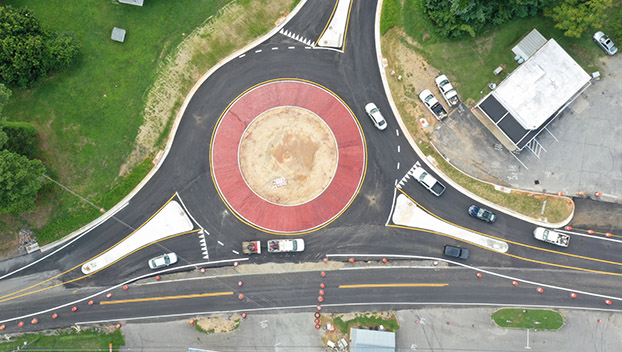 KINGSVILLE – When will it be finished? That’s the first and most often asked question The Herald gets about the Kingsville roundabout. Originally expected to be done this month, work continues on the project, which opened to traffic in August. Now the Virginia Department of Transportation has a new end date for construction.

“The entire project should be wrapped up in the next few weeks, with the roundabout itself being the priority,” said Len Stevens. He works as a communications manager for VDOT’s Lynchburg Division, which includes Prince Edward County. “The overall completion date is set for November 11, but they may actually wrap up all punch list items before that date.”

The main issue for residents is that rather than solve traffic issues, construction on the Kingsville roundabout has created some. On any given day, it’s not uncommon right now for traffic to be backed up almost two miles out in either direction. That’s because while the roundabout itself was finished more than a month ago, work was still needed on the sides and the asphalt itself needed to be replaced. Because of the way VDOT operates, using a method called staged construction, that didn’t happen all at once. Instead, it’s being done piece by piece.

The idea is to keep a road open or open as soon as possible during construction. To this end, work crews will focus first on getting the basics finished. But that doesn’t mean the overall project is complete.

“Traffic shifting into the roundabout doesn’t mean the project is ‘done’,” Stevens said. “The contractor is now working to remove the old roadway where traffic was and will build the new roadway, curbing and shoulders.”

Stevens said this is basically standard practice for a VDOT project.

“This is typical when working in a way that keeps traffic going during a project,” Stevens said. “It’s called staged construction.”

And yes, that means putting up things like temporary traffic lights or using a flagman to move traffic through the construction zone. This is the part of construction where work crews move from area to area, finishing up masonry and a few aesthetics.

While that means delays now, it also signals the project’s end is nearly here.

Stevens also said while VDOT does give estimated or expected completion dates, they are just that: estimates.

“We always speak of expected completion dates for projects, because there is always the possibility for delays,” Stevens said. “(That could be) due to bad weather, material availability, unexpected challenges discovered underground or other situations.”

In this case, there have been several issues. Significant storms have come through on a regular basis, including the remnants of Hurricane Ian a couple weeks back. Before that, in August, the heat climbed near 100 degrees Fahrenheit for several days. As a result, workers had to take longer breaks or stop completely.

Beyond those issues, Stevens said some of the needed material hasn’t been available. Once it arrived, they also had to work around schedules for the contractor and subcontractors, when people were available to work. That’s also why work crews haven’t been doing this late at night. There’s not been enough people available for the project during those times.

Stevens asked people to hang on just a couple more weeks and this will be over.

“We continue to preach patience with the roundabout itself and look forward to the project’s completion,” Stevens said.