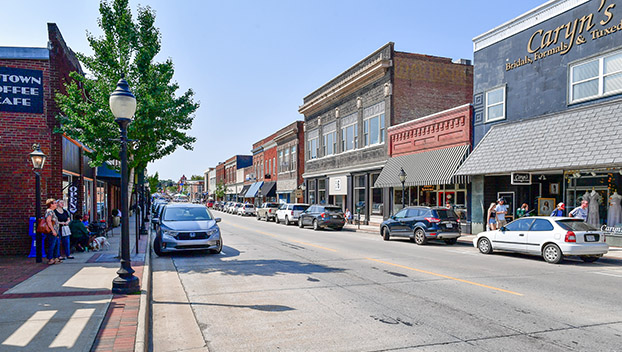 It started with a conversation earlier this month at Three Roads Brewing. What began as a welcome to Prince Edward County switched gears after the folks involved heard where I was from. I’m a Wilkes County boy, having grown up in the mountains of western North Carolina.

And Wilkes has been in the headlines this fall for a major success, getting their NASCAR track reopened nearly 30 years after it closed its doors. That newly reopened track will now host the 2023 NASCAR All-Star Race, as well as a race for the truck series next year, bringing a significant injection into the local economy. And as we talked about NASCAR and the North Carolina mountains, one question kept popping up. What would it take for something like that to happen in Prince Edward County?

The question popped up again after a series of announcements this month. On Oct. 12, Hitachi Energy agreed to invest $37 million and add 165 jobs to its facility in Halifax County. Eight additional projects popped up in Southwest Virginia one week later, adding up to more than 200 jobs and $5 million invested.

And then there’s the city of Danville. Known as “Comeback City”, within a few months a $450 million casino will be operational there, just one of several economic development projects to become reality over the last year. In each case, we got emails here at The Herald asking why not here? People asked what it would take for something like this to happen in Prince Edward County. To answer that, I have to share a story.

When NASCAR shut down the North Wilkesboro Speedway in 1996, my hometown suffered. Hotels, restaurants, even nonprofits planned for the revenue the yearly races brought. Without that, businesses closed, tax revenue dropped and things like school repairs were put off. There were times growing up that Boomer-Ferguson Elementary, where I attended, wasn’t much different from Prince Edward Elementary, leaky roof and all. Add that to several factories closing and there wasn’t much left. Naturally, plenty of families picked up and moved on, looking for something better.

To actually move forward, it took something more than just politicians making promises. It took a majority of residents agreeing on a direction and then actively getting involved to make it happen. I can’t underline this part enough. It sounds simple, but it’s not. For Wilkes, this took decades, to cut through the arguing and infighting, to get the different groups to agree not just on a path forward but what that path would cost.

In order to build and grow, communities need a shared vision. I’m not saying something generic like “we’ll make it better”. I mean a brand, something that when you say it, you automatically think of that area. Before you even think about Prince Edward County’s future, what is its brand? How do you market it to people? Wilkes County is NASCAR country. Danville is the “Comeback City”. When people think of Prince Edward, what do you want them to think about?

Put in the work

But a brand alone isn’t enough. Only a handful of people will even look at a crumbling house for sale. You can talk up the house’s history, explain what a great location it is and recite the brand, but still get no reaction. It’s the same with towns and counties.

For Wilkes to move forward, county residents had to realize things like roads, high-speed internet and functional schools were critical. Repairs and upgrades just couldn’t keep getting put off. After all, it’s hard to sell NASCAR on all the benefits of coming back when roads are crumbling and other buildings are empty.

I’ve covered businesses ranging from small to worldwide operations. They’re all the same in one category. If a city, town or county lacks the needed infrastructure, that’s it. They cross it off the list. No amount of tax incentives or other promises will make up for a decaying sewer system, damaged roads and shaky at best internet. Wilkes had to put millions of dollars into needed repairs to fix all of that over the last decade, work that’s still going on, to be honest. Just Google the Wilkesboro Taco Bell sinkhole. You’ll see what I mean.

And Wilkes is a rural area, just like Prince Edward, so it’s not like they had buckets of money to address all of these needs. That meant applying for grants, asking for private partners to help and raising taxes to speed up the process. It also meant pushing ahead even after being told no more times than I can count.

And it meant being prepared to hurry up and wait.

Waiting is the hardest part

Tom Petty and the Heartbreakers had it right. Waiting truly is the hardest part. After all, we want action immediately. Once a vote happens or a decision is reached, there seems to be this belief that you snap fingers and everything appears in place. In truth, it can take months, if not years, to see work completed.

That’s the biggest thing. Change doesn’t happen overnight. Even if you’ve done everything I mentioned above, it will take time to see new businesses move in. It’ll definitely take time to change how people perceive a town or county. For Wilkes and Danville, both efforts took more than a decade. The same will be true here in Prince Edward. There is no shortcut, no quick fix.

If you want to move forward, you have to be prepared to look down the road and see what today’s efforts will bring in 10 or 20 years. It can be frustrating at times, but the end result is worth the work.